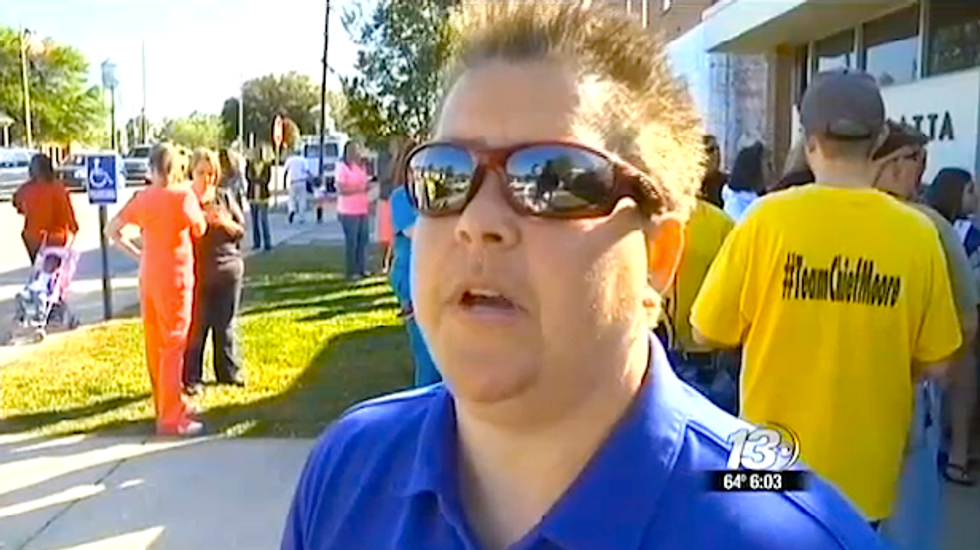 City Council members demanded answers from a South Carolina mayor who fired a veteran police chief because she’s a lesbian.

Latta Mayor Earl Bullard fired Police Chief Crystal Moore on Tuesday, saying the 20-year veteran had drawn seven reprimands -- but a city councilwoman said the mayor issued all of those reprimands in one day, the first in her career.

City Council members told WBTW-TV that Bullard holds a vendetta against Moore because she investigated the mayor’s most recent hire – and because she’s openly a lesbian.

One of the city councilmen, Jared Taylor, said he recorded the mayor making anti-LGBT remarks during a phone conversation.

"I would much rather have, and I will say this to anybody's face, somebody who drank and drank too much taking care of my child than I had somebody whose lifestyle is questionable around children,” Bullard says in the recording.

“Because that ain't the damn way it's supposed to be,” the mayor continues. “You know, you got people out there -- I'm telling you, buddy -- I don't agree with some of the lifestyles that I see portrayed, and I don't say anything because that is the way they want to live, but I am not going to let my child be around."

Bullard tells the city councilman that he doesn’t approve of same-sex marriage and would not want his child to be aware that such relationships exist.

“That ain't the way the world works,” the mayor says. “Now all these people showering down and saying, 'Oh, it's a different lifestyle, they can have it.' OK, fine and dandy, but I don't have to look at it, and I don't want my child around it."

City Council held a special session Thursday night to address Moore’s firing, but Bullard said he could not address personnel matters in a public forum while also claiming he was within his rights to oust the chief.

“According to state statute, under our present form of government, the mayor has the right to suspend, hire or fire any employee of the town with the exception of the town clerk/treasurer, the town attorney and the municipal judge, if you have one,” Bullard said. “The mayor has all the power to fire or suspend.”

But Taylor and other councilmembers disagreed, saying the mayor didn’t have the authority to fire Moore without a majority vote by City Council.

“We have a strong mayor/weak council form of government, and the municipal association rules state that the mayor has the right to hire and fire, subject to personnel rules adopted by the town council,” Taylor said. “Our personnel rules say hiring and firing is subject to council approval.”

South Carolina does not prohibit discrimination against public or private employees on the basis of sexual orientation or gender identity.

City Council voted 6-1 during Thursday’s special session to move forward with a plan to strip some of the mayor’s powers and tilt the balance and adopt a strong council/weak mayor system, which would require a referendum.

The town must wait at least 60 days to hold the vote.

"I can't believe that we still have no equal rights,” Moore said after the council vote. “That's the biggest issue. I've been harassed, intimidated. This is the first time it's been this public. I'd tried living a quiet decent life and do what I'm supposed to.”

Taylor said the police chief refused to sign the written reprimands Bullard issued to her, and he said at least five of them could be proven wrong.

“She told the mayor she wanted to confer with her attorney before she signed anything, and basically, she was told she had to sign the reprimands right then or she was fired,” Taylor said. “She still wouldn’t sign and, from what I understand, he fired her on the spot.”

Latta have thrown their support behind Moore, and more than 100 residents of the small town gathered Wednesday in front of the town hall to demand her reinstatement.

They held a prayer vigil later that afternoon for the ousted police chief.

“Crystal has worked for this town for over 20 years,” Taylor said. “She started out as a dispatcher, I believe, while she was in high school. People in Latta love Crystal, and people have really embraced Crystal. She should have never been fired. I’ve got 3 ½ years left on council, and I will fight 3 ½ more years if I have to, because I think she deserves it.”