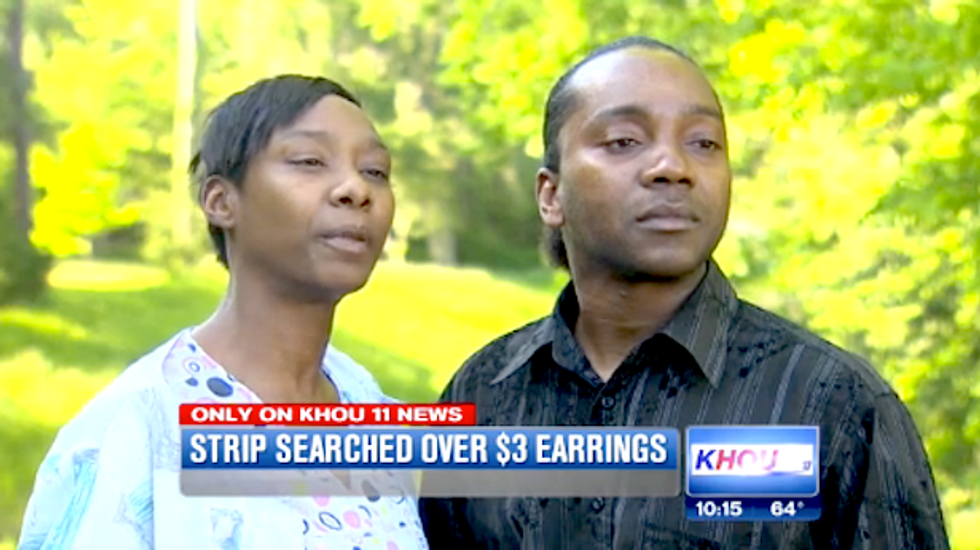 A Texas couple said they were intimidated into a strip search by a store manager over a pair of $3 earrings they were accused of stealing.

Deadra Pattum said she was overbilled for the earrings, which she said she picked up but returned to the display at Y Beauty Supply in southeast Houston.

Both Pattum and her fiancé, John Marsden, are black, said the store owner made a racist remark toward them during the incident.

“The owner said, ‘You people always steal,’” Marsden said. “He said, ‘Give me the earrings and I (will) call (the) police.’ My rights were revoked.”

The couple told KHOU-TV they were threatened and forced to remain in the store, where Pattum had gone to buy hair extensions.

Marsden said the store manager used intimidation to force him to strip down and be searched.

A security guard showed up minutes later and examined the security video, which backed the couple’s claims.

“She never left the counter with those earrings in her hand,” the guard said. “There was no evidence of shoplifting.”

Police agreed after examining the same video, and Houston-area civil rights activists have taken up the case to highlight racial profiling.

The store’s owners declined to discuss the incident but claimed shoplifting costs their business a lot of money.

That offers no consolation to Pattum, who’s still hurt and upset she was accused of stealing.

“Everybody doesn’t shoplift," Pattum said. "Everybody is not a thief. There are still honest people in the world.”

The couple hopes the store owners, who are Asian, will be charged with unlawful search.

"I want more than an apology from these people," Marsden said.