This cool new paint can conduct electricity when it dries 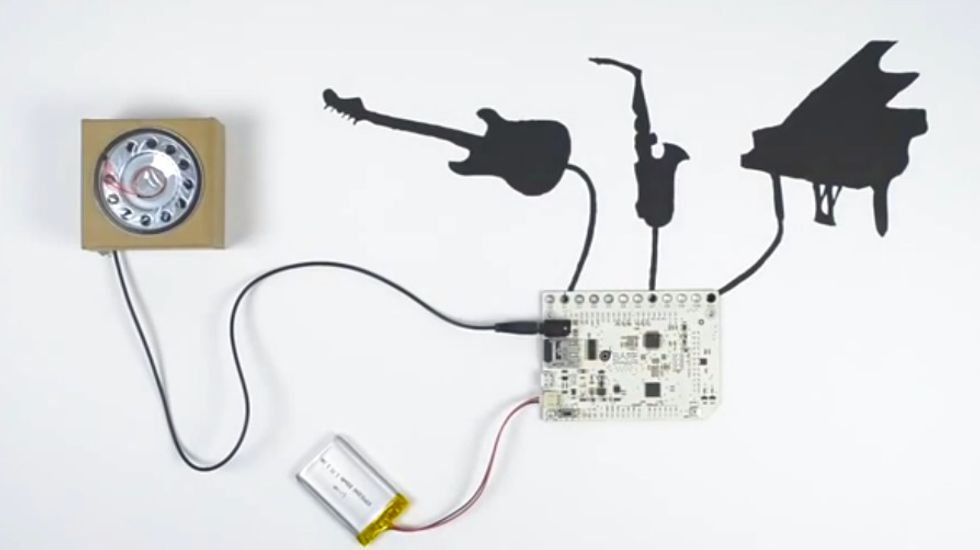 It is unsurprising that in the meeting room of Bare Conductive's east London office, there is a light switch on the lefthand side of the door. What is surprising is that the switch is painted onto the wall. More surprising still is that the company says the button does not need to be there at all: you could in theory tap anywhere on the wall and a light would come on.

The light switch acts as an illustration of the young company's core product – an electric paint or "paintable wire" which can be applied to paper, wood, cement and textiles, among other materials, and becomes conductive once it dries.

From its most simple use of lighting up a tiny bulb on a birthday card to creating an over-sized game controller for consoles or painting an entire wall so that when it is touched a light comes on, the liquid has been used for a variety of applications since the four founders of the company came up with the idea while working on a final-year project together at the Royal College of Art.

In 2009, Isabel Lizardi, Matt Johnson, Bibi Nelson and Becky Pilditch wanted to investigate whether they could print an electrical circuit on to the body, eventually settling on an idea for an electric paint.

After looking at the ingredients of existing conductive paints, the group examined how they could bind together a conductive powder into a paint – their first experience was copper powder in glue – and eventually came to a formula using carbon, a similar concept to the non-toxic paint they now sell. Early tests show the paint on skin being used as a conductor between a battery and a tiny bulb which lights up.

"The project was four months long and by the time we got to the idea that we wanted to create a material, I think we had a month left so we spent a month figuring out how to create this prototype," said Nelson.

"We were quite rigorous in our analysis of existing materials. It is based on a lot of similar paints in that they were made in a similar way without realising it necessarily at the time. We just needed to figure it out as quickly as we could. We also thought that 'this is as far as it will go'. We never imagined that afterwards we would need to develop it for manufacture – it was just to prove the idea, and that was it."

After the paint was displayed at a student design conference in Eindhoven, interest from the public started to build. Soon, an email from Sony Music arrived saying they had an artist who wanted to use the paint in a music video. In the film, dancers' feet and hands were painted while they stood on a pad of the dried fluid, which was in turn connected to computers. The dancers became extensions of a circuit so that when their hands were slapped by the DJ Calvin Harris, various drums and beats would sound – a system dubbed a "humanthesizer".

The film sparked huge interest across the web, and the four graduates were exposed to a deluge of suggestions from the public about what the paint could be used for – an experience they say they were not ready for.

"At the time the tutors were saying 'you are doing interesting work but what is it for?' and we kept saying that we know it is interesting so we feel we should keep doing it, but we were also not sure that we are the best people for deciding what it is for exactly," said Johnson.

"That mentality of saying we are creating a platform and then giving it to other people and then they tell us – that is what the business is built on now and it has given us a lot of success."

By 2010, after leaving the idea of a body paint behind due to the complex cosmetic manufacturing regulations they would have to follow, they came to the conclusion that there was a business opportunity in their "paintable wire".

A £100,000 grant from the Technology Strategy Board allowed them to advance their plans and also acted as a validation for their idea, to attract other investment. By September 2011, they started to sell jars of the paint and soon after a pen from which lines of circuits could be drawn.

"The best thing about the material and our approach is that it provides for engagement of multiple kinds of intelligence. We go to a trade fair and an electrical engineer picks this up and starts asking detailed questions. But then someone else comes who knits for a living and they want to make their knitting responsive and their skills and intelligence are engaged at the same point," said Johnson.

Kits are now produced which allow children to learn about electronics by drawing their own greeting cards with lights on them and making a small cardboard house with a the inside. Concert posters that play music when you touch them have been discussed, while an artist has mixed the paint with oil in a lamp so that when the lamp is tilted, the light dims. A blogger painted a cushion with large buttons to play games on her computer, and invitations to a party have been turned into musical instruments by being plugged in.

The company has now expanded to eight people, while seven private investors have put in £450,000. A Kickstarter campaign to launch a programmable circuit board has been oversubscribed eightfold. Sales for this year are anticipated to exceed £1m, according to Johnson.

The product has not been without criticism from those who question why the paint has no exact end use. "I think it is that people aren't comfortable because they want a simple story about [how] we are going to reinvent the Oyster card or we are going to build the world's tallest building and say 'that's easy'.

"And we say 'we know it's great but we don't know where it is going to end up yet'."

Bare Conductive's black paint uses carbon to conduct electricity when it dries after being applied by a brush, roller, stencil, pen or any method usually used to apply paint. It can be used domestically to fix broken electronics, such as remote controls, while hobbyists use it to create things such as drumkits which can sense hand movements without being touched.

A 10ml pen costs £6, a 50ml tub costs £18, a card with three greeting cards and electronics costs £15. The products are sold through the Science Museum in London, on the company's website and in Radioshacks in the United States among other outlets.