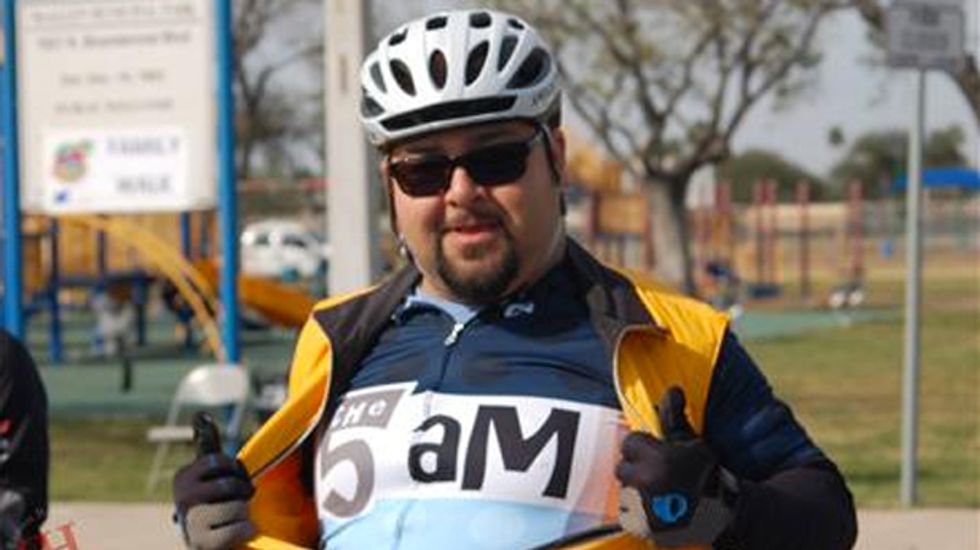 Two men are in custody in Texas after police, responding to a hit and run report, discovered them attempting to dump the body of the bicyclist they hit in a nearby canal.

According to KGBT, the victim, 38-year-old Eduardo Arguelles, was bicycling in the early morning hours with a friend when he was hit by a white Ford pickup truck at approximately 4:30 AM.

According to the friend, the truck failed to stop, with the driver turning off his headlights before speeding off.

Following a 911 call from Arguellles' riding companion, police and firefighters arrived to find his mangled bike on the side of the road - but no body - setting off a search.

"It was at that point that the traffic investigation division started to suspect the possibility that upon impact the bicyclist may have flown in the air and landed in the bed of the pickup," said Edinburg Police Lt. Oscar Trevino.

Two hours later police received a phone tip describing a truck with front end damage matching the description given by the friend.

Police arrived to find the driver, Emilio Gomez, and his companion, Nelson Cantu, preparing to dispose of the body.

"Immediately, they observed that there was a body that was laying outside the pickup and there was evidence to show that the body was inside the bed of the pickup,” said Trevino. “To sum it up-they were caught in the act of trying to dispose of this body."

Gomez faces charges of intoxication manslaughter, accident involving injury or death, and tampering with physical evidence and is being held on $2.25 million bond. Cantu faces charges of failure to report a felony and remains in jail on a $50,000 bond.

Watch the video from KGBT below: