Watch: Medal Of Honor recipient slaps down pro-gun advocate over arming troops on base 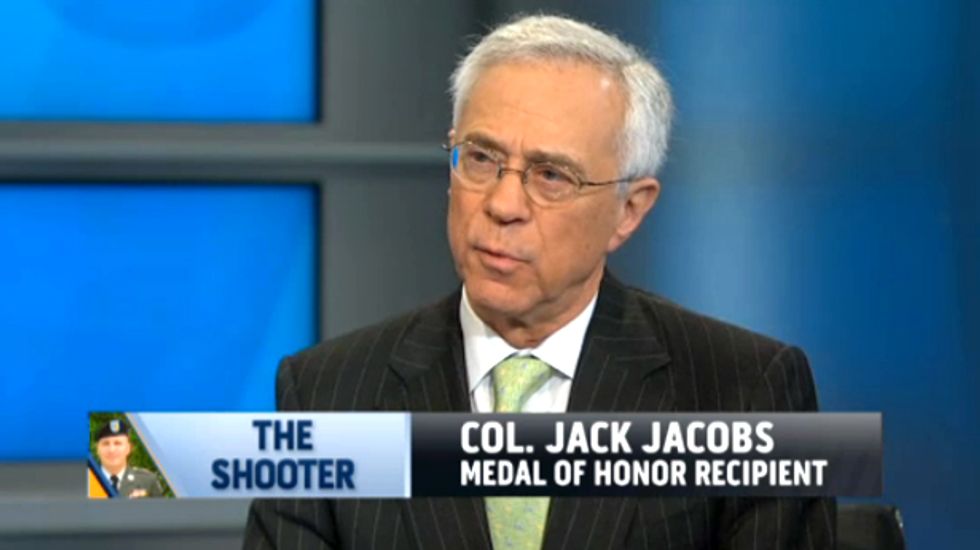 "The situation that existed at Fort Hood the other day, in a circumstance in which everybody has weapons, could very easily result and probably would have resulted in an enormous mass fratricide, and you would have this all the time," said Jacobs. "Arming everybody in a civilian situation like at Fort Hood would result in a terrible, terrible tragedy, larger than this one."

Jacobs added, "The assumption is the shooter values his won life, more than he does carrying out what he's going to carry out. And, therefore, he's not going to do it if everybody else is armed? Complete nonsense. We saw with Lopez, for example, that he killed himself, and the large majority of mass shooters do the same thing."

Pro-gun researcher John Lott, who has never served in the military and is trained as an economist, attempted to compare the Ft. Hood shooting to 2012's Sandy Hook mass murder which claimed the lives of twenty children and six adults.

"When people go and try and commit these mass shootings, they're trying to get attention." Lott said, pointing out that Sandy Hook Shooter, Adam Lanza, had researched media attention paid to people who commit the crimes.

Host Chris Lansing then pointed out that Lanza's shooting had "nothing to do with a military base."

Lott, who is most notable for a disputed study in 1997 study which  he claims showed that more guns means less crime, continued to insist that the shooting was about getting media attention by "killing as many people as you possibly can,"  insisting, "If you can limit that, you can deter them from committing these horrendous crimes."

Saying that there is a risk in everyday life, Jacob's said that "Prudent commanders need to be prudent."

"Arming everyone on post, seems to me, to be a very foolish response."

Jacob continued, "Arming everybody on post, and the attendant danger, is not a solution to protect the lives of people who serve and sacrifice for us. "

Pointing to Lott, he then said, "Now you can say what you want to say."

Lott responded by saying there were "lots of other options" besides armed military police.

Jacobs concluded: "No responsible commander would ever agree to arm all of his soldiers on post, that's all there is to it, and I know: I've commanded lots of troops in and out of combat."

Watch the video below from Media Matters for America: