Why are geocentrists trying to undo centuries worth of accepted science? (Hint: The Jews) 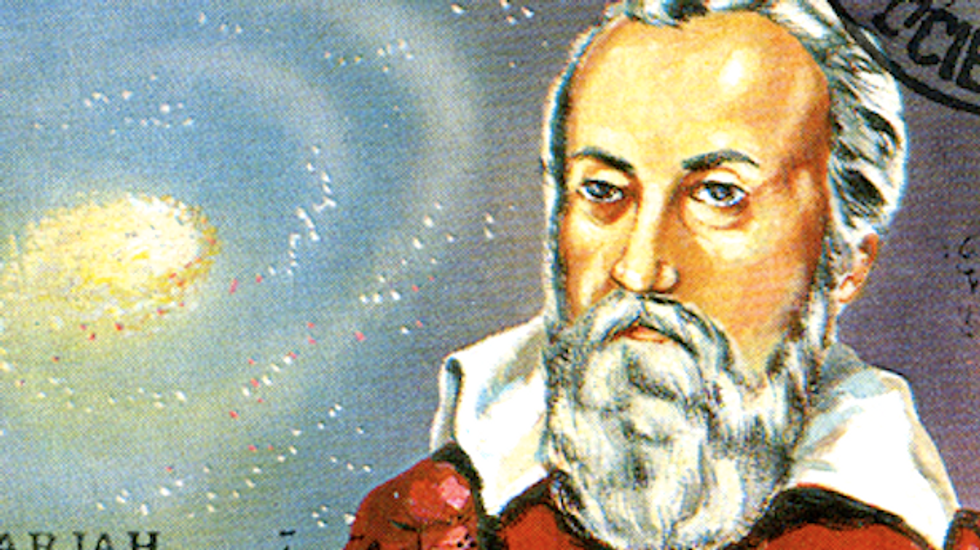 Most people probably assume the scientific debate over the Earth’s place in the universe has been settled for centuries, but a small group of conspiracy theorists have been quietly pushing the idea that Galileo was wrong.

The Raw Story brought them blinking into the light earlier this week with a report on their plans to release “The Principle,” a film narrated by "Star Trek: Voyager" actress Kate Mulgrew and featuring interviews with several prominent scientists, that questioned the Copernican principle placing the sun at the center of the universe.

Mulgrew and scientist Lawrence Krauss both reacted to the controversy by claiming they’d been duped by the geocentrists -- and two of their ideological opponents say the group intends to dupe the public.

The film’s producers deny it promotes geocentrism but instead focuses only on the Copernican principle that lends the movie its name.

While he called the geocentric view “utter bunkum,” MacAndrew said the Copernican principle offered “a nice cosmological and philosophical question.”

The film’s principal backer – Robert Sungenis -- is also developing another film that will focus on geocentrism to be released after “The Principle.”

“There can be no doubt that for these individuals a full-blown geocentrism is the end game in view,” said David Palm, a theologian who has tangled online with Sungenis and his allies over their philosophies. “It has always been the ulterior motive behind finding scientists who could be enlisted to question the Copernican principle. They’re essentially trying to soften up their audiences by presenting less fringe and controversial material before hitting them with the full monty, so to speak.”

The new geocentrists believe scientists have conspired for centuries to undermine religious faith by promoting the heliocentric model of the universe proposed by Copernicus and famously championed by Galileo.

“Just as there are those on one extreme who incorrectly hold that science is antithetical to faith because they have a false or incomplete understanding of philosophy and/or religion, we have the geocentrists on the other extreme who reach the same incorrect conclusion, but because they have a false and/or incomplete understanding of science -- and even their own faith,” Palm said. “For these geocentrists, their personal understanding of faith trumps all appeal to reason and physical evidence.”

Americans may be particularly vulnerable to such "bunkum."

Recent polls have suggested that one in four Americans are unaware the Earth revolves around the sun, just as one-fourth of Americans believe President Barack Obama may be the Antichrist, 33 percent hold creationist beliefs, nearly 40 percent believe global warming is a hoax, and about half believe in one or more medical conspiracy theories.

Against that backdrop are efforts by state legislators to allow or insist teachers teach creationism or intelligent design by arguing that the theory of evolution is somehow controversial.

"A surprisingly wide spectrum of people – obviously anyone predisposed to be anti-science or to believe in conspiracy theories (is vulnerable)," MacAndrew said. "But at a certain level some of the arguments can seem more complex than at first sight, and anyone insufficiently knowledgeable in physics could be taken in -- especially since the geocentrists often deploy dishonest, inconsistent or plain incorrect arguments."

Palm, who maintains the website GeocentrismDebunked, said it would be a mistake to assume geocentrists are stupid or acting in bad faith.

“Belief in this theory seems to be largely a product of being emotionally affected by the false idea that our physical location in the universe must convey something about our existential and/or theological significance,” he said.

Indeed, many of the group’s social media postings plaintively ask: “Are you significant?”

The view has attracted a rogue’s gallery of crackpots who promote a stupefying variety of conspiracy theories – usually anti-Semitic – that casts doubt on the lunar landing, the Holocaust, and the official investigations into 9/11, the JFK assassination, and even the sinking of the Titanic.

“All NASA would have to do is put a digital pattern in a laser/plasma projector aboard a satellite and then shoot it down to earth, and presto, you have a crop circle," Sungenis wrote. "It gets everybody talking about UFOs. But really, all they are doing is getting our minds off the Bible and Christ by making it look like neither are true.”

Palm, a Catholic, said he became involved in pushing back against the geocentric fringe several years ago after Sungenis posted anti-Semitic conspiracy theories on his website claiming an affiliation to the Catholic Church.

His local bishop asked Sungenis to stop writing about Jewish people and issues and ordered him to stop calling his organization a Catholic one over his anti-Semitic postings.

Palm said he was most concerned that Sungenis had duped sincere Catholics by claiming geocentrism was an official church teaching that had been covered up for centuries.

“That is simply false and it leads people into a very dark and conspiratorial view not just of the world at large, but even of their own church,” said Palm, who fears this can be harmful to faith.

“Of course, for those who believe Sungenis, it no longer really matters what physical or historical evidence is presented because it’s a matter of faith for them,” he added. “He basically sets himself up as the only one they can really trust – he’s the ultimate arbiter of both religious and scientific ‘truth.’ It can be very tough to break through that kind of wall.”

For MacAndrew, an atheist, the danger posed by geocentrism is similar to those posed by “young earth” creationism or anti-vaccine advocacy.

“(It) irrationally (undermines) public confidence in the scientific method in support of a literal interpretation of a religious text,” MacAndrew said.

“’Scientific’ beliefs which are plainly wrong short change people – the actual science is so much more interesting, awe-inspiring and life enhancing,” he added.

Watch the trailer posted online by The Principle Movie: