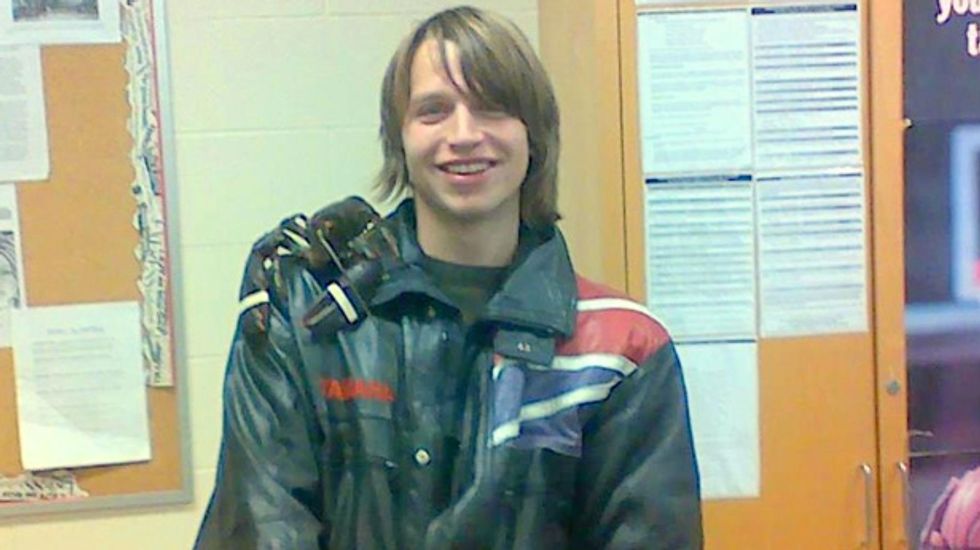 A Canadian woman who struck three teens with her SUV, killing one and injuring the others while they were riding bikes on a dark road, has filed a $1.3 million suit against the deceased teen, his family, and the two other boys claiming 'emotional distress' according to Toronto CVT News.

Brandon Majewski died after being struck from behind by an SUV driven by Sharlene Simon while cycling with two friends at 1:30AM on Oct. 28, 2012. He was 17 at the time.

Simon, a mother of three, has filed suit against the dead teen and his family, and the two other boys, Richard McLean and Jake Roberts, both 16, asking for $1.3 million for 'emotional distress,' citing psychological suffering, depression, anxiety, irritability and post-traumatic stress.

In her suit Simon blames the boys for the accident claiming, “They did not apply their brakes properly... They were incompetent bicyclists.”

The lawyer for Majewski's family expressed shock at the lawsuit.

“In all of my years as a lawyer, I have never seen anyone ever sue a child that they killed,” said Brian Cameron. “It’s beyond the pale. I just couldn’t bring myself to tell them on the phone.”

Cameron met with Majewski's parents and step-parents in his office to inform them of the suit.

“I’m devastated, I’m in shock,” said Brandon’s mother, Venetta Mlynczyk. “She killed my child and now she wants to profit from it? She says she’s in pain? Tell her to look inside my head and she will see pain, she will see panic, she will see nightmares.”

Simon's lawyer, Michael Ellis, asserts that she is traumatized and has been unable to return to work since the accident.

"She relives the terror of this incident every day. Ms. Simon has been unable to return to work since the collision. She has been diagnosed with post-traumatic stress disorder. She is also a victim," Ellis said in a statement.

Simon is also suing the County of Simcoe, where the incident occurred, for failing to maintain the road where Majewski was struck.

According to police, Simon was driving down the darkened country road at 90km in a 80km zone when the accident occurred.

Simon's husband, a York Regional police officer, was following her in another car. No breathalyzer test was given at the scene of the accident and her husband was allowed to drive her home.

The family of Majewski has asserted that Simon may have been drinking and that she was on her cellphone at the time of the accident.

The Majewski family has already filed suit against Simon seeking  $900,000 in damages for the "emotional trauma and shock" of their son's death.

In that suit, Simon, Simon's husband Jules -- who is the owner of the car-- and the County of Simcoe are named as defendants.