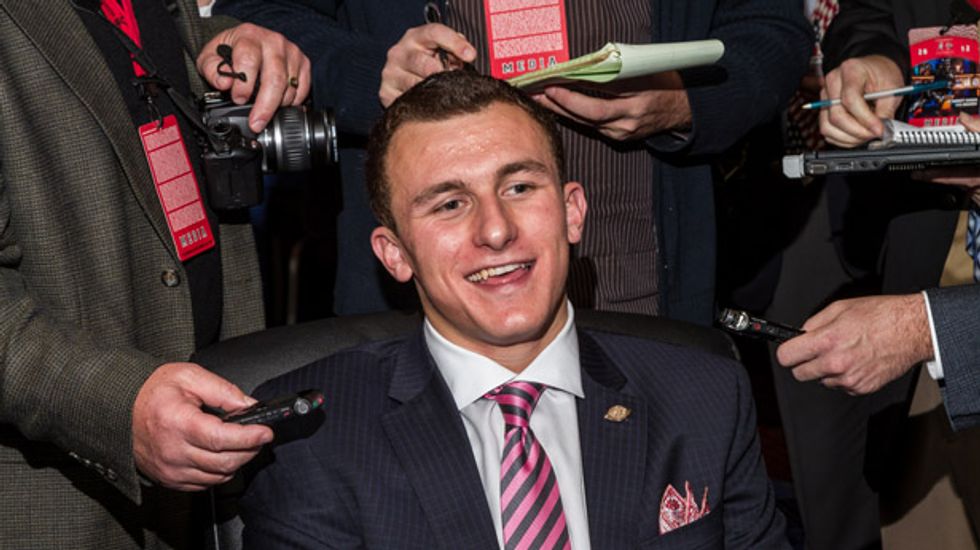 A $25 million lawsuit filed against football player Johnny Manziel alleging sexual harassment and serial Instagramming pictures of his penis is “1000000% fake and frivolous,” according to his agent.

The suit was filed in Florida last week, and named HLN host Samantha Schacher as the plaintiff. But Schacher said the suit was actually filed by Jonathan Lee Riches, a convicted felon who has sued thousands of people.

The lawsuit claimed that the Heisman Trophy winner and first round draft pick of the Cleveland Browns had been sexually harassing Schacher via Skype and Instagram, and requested a restraining order against Manziel as well as $25 million in punitive damages for “emotional distress.”

Responding to media reports, Manziel agent's Erik Burkhart called the lawsuit "fake" on Twitter. He said it was "embarrassing" that he even had to respond to the bizarre false allegations.

The suit also alleged: "Johnny Manziel said he Skyes [sic] with Judereon Clowney [sic] in South Carolina, and Clowney sent Manziel a Pic of is penis which was 9 inches, and Manziel showed it to me on Skype and asked me if I could handle that monster."

Jadeveon Clowney was the first pick in the NFL draft, going to the Houston Texans.

The suit also claimed that Manziel told Schacher via Skype that he would purchase lingerie from Victoria's Secret and sex toys from adult store Adam & Eve for her with money given under the table to him by Texas A&M head coach Kevin Sumlin. He allegedly bragged about smoking marijuana and taking steroids while playing for A&M.

Manziel, known as "Johnny Football," has a reputation for off-field drinking and antics, which many believe caused him to drop to Cleveland in the NFL draft despite being the first freshman to win The Heisman Trophy.

Read the suit below: