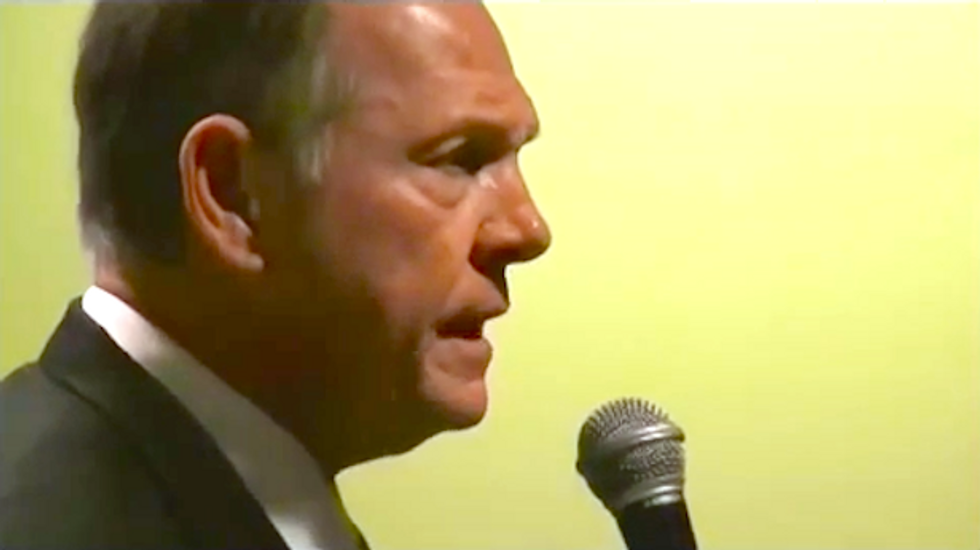 Chief Justice Roy Moore of the Alabama Supreme Court rebuked U.S. Supreme Court Justice Ruth Bader Ginsburg for holding an elastic view of the Constitution, even as he advocated calling for a new constitutional convention to rewrite the existing document.

The ultra-conservative judge, who recently suggested the First Amendment applied only to Christians, spoke Saturday at the 28th District Republican Club.

Moore told the gathering that same-sex marriage undermined the foundation of the United States, citing the 1885 Supreme Court decision in Murphy v. Ramsey – which upheld prohibitions against polygamy and defined matrimony as the union of “one man and one woman in the holy estate of matrimony.”

“It is the sure foundation of all that is noble and stable in our civilization,” Moore said. “It is the best guarantee of that reverent morality which is the source of all beneficent progress and social and political improvement. Foundation is the foundation of our country. If it is destroyed, then our Constitution will fail, our government will fail because God’s institution has been interfered with.”

Moore said same-sex marriage was intended to undermine the United States and its foundational institutions.

"It’s not about two men getting married or two women, it’s about destroying an institution ordained of God, it’s about feeling good but ignoring God’s laws for happiness for civilization for progress as the United States Supreme Court recognizes," he said.

He suggested a constitutional amendment to define marriage in that way, if not a new constitutional altogether, and read a poem about how far America had strayed from its Founding Fathers’ vision.

“I’m glad they’re not here with us to see the mess we’re in, how we’ve given up our righteousness for a life of indulgent sin, when abortion is no longer called murder, when sodomy is deemed a right, when good is now called evil, and darkness is now called light,” Moore said.

He lamented that elected officials ignored “biblical truth” and used the latest polls to determine what their constituents wanted, as the overhead projector showed a photograph of former President Ronald Reagan.

“Our children are told they can’t pray in school and they teach them evolution,” Moore said. “Why can’t they see the fear of God is the only true solution? Our schools have become a battleground while all across the land, Christians just shrug their shoulders, afraid to take a stand.”

He compared the culture war to the Vietnam War in which he served as a military police officer.

“Today we face another war fought not upon some distant shore nor against a foe that you can see but one as ruthless as can be,” Moore said, continuing his poem. “He’ll take your life and your children, too, and say there’s nothing you can do.”

He read from Gen. George Washington’s farewell address, suggesting the first president had warned of liberals who would try to reshape the Constitution in subtle but significant ways.

“That’s exactly what Ruth Bader Ginsburg is doing,” Moore said. “It’s irregular, because she is a Supreme Court justice sworn to uphold it.”

He told the group that religious conservatives would most certainly prevail if only they would take a stand.

“I think there’s a new day coming,” Moore said. “I don’t think we need to submit to the liberal agenda any longer and think they’re going to win. They do not win, they do not win. God’s waiting to see what we do, what we as His people, called by His name will do because He can change it, just like He had the Berlin Wall fall, just like so many things have happened. We’ve got to rise up and be the Americans we’re meant to be.”

Watch this video from the event posted online by Wally Brown: