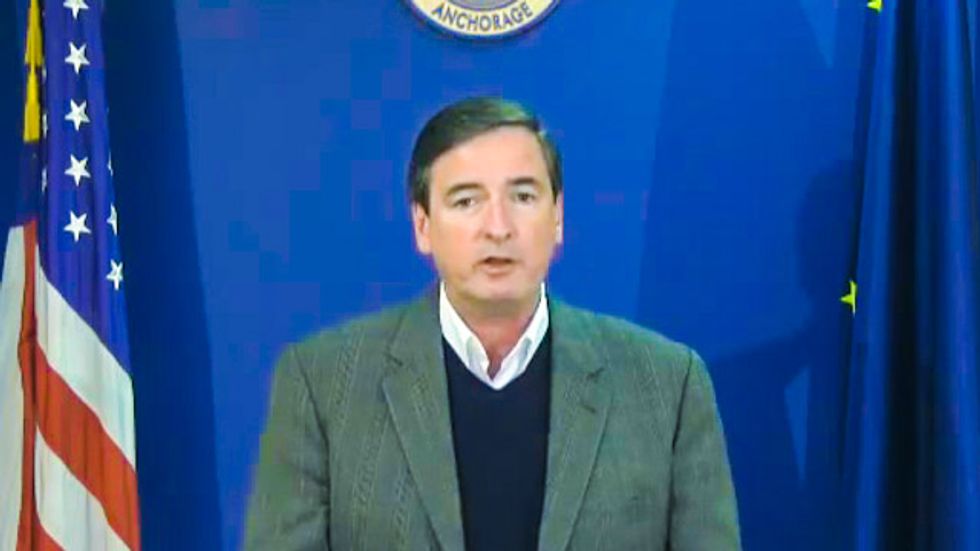 A Republican candidate for lieutenant governor in Alaska on Wednesday insisted that slavery had "no racial connotations" in the United States after he used the term to blast unions.

At a candidate forum on Monday, Anchorage Mayor Dan Sullivan had lashed out at unions when asked about his support for a right-to-work city ordinance.

“Nobody should have to basically pay someone else to get a job in this state -- I mean, we got rid of slavery a long time ago," Sullivan opined. "We should never have to encumber yourself out of your wages in order to work in this state.”

Both the NAACP and the AFL-CIO quickly demanded an apology.

“When you refer to slavery in any way, shape or form, it’s the last thing that I think you can compare it to, which is stand up for workers and workers banding together to improve wages and working conditions,” Anchorage chapter of the AFL-CIO President Vince Beltrami explained.

NAACP Alaska Branch President Wanda Laws on Wednesday told The Associated Press that Sullivan should apologize because using slavery to make a political point "diminishes how horrible and tragic" the practice was.

“I don’t think an apology is necessary,” Sullivan said at a Wednesday press conference. “I think that maybe people just need to discuss and clarify what it means to be forced to do something you don’t want to do to get a job. And by various definitions, that’s a form of economic slavery.”

And then in a statement released by a spokesperson later on Wednesday afternoon, Sullivan seemed to backtrack.

“To me, the term has no racial connotations except that people of all races may be prohibited from holding certain jobs unless they pay tribute to an organization they may not support,” Sullivan said. "I do however; understand the sensitivity that the term slavery connotes and I apologize if the use of the word offended anyone.”

Sullivan has also recently come under fire after he said that teaching was "the second-degree choice," and "not the first-degree choice."

Watch the video below from the Chamber of Commerce lieutenant governor candidate forum, recorded May 5, 2014.