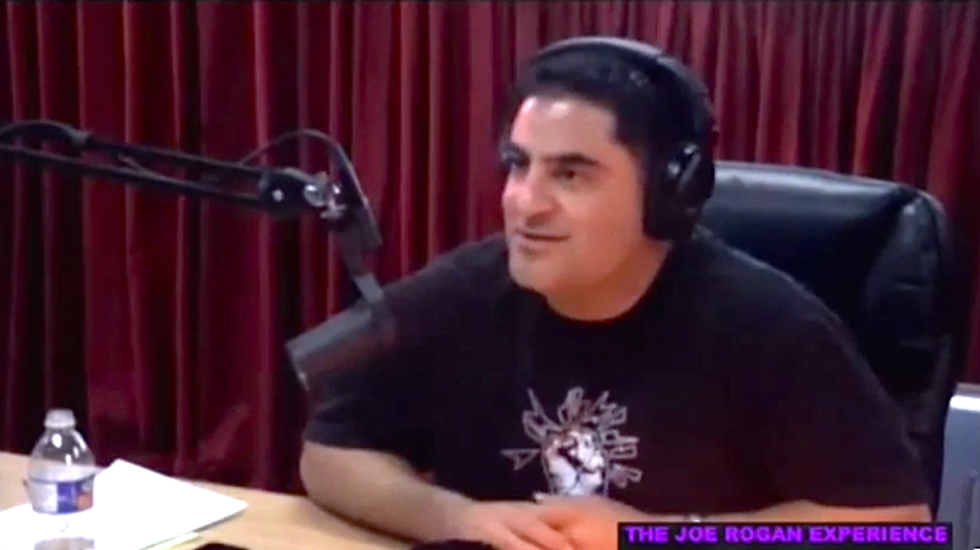 The Cliven Bundy standoff is a complicated tale that highlights a number of political flashpoints, said comedian Joe Rogan, and illuminates everything that’s wrong with TV punditry – which he said was personified by Sean Hannity.

The Fox News anchor helped promote the scofflaw rancher and his militia backers until Bundy made some highly publicized racist remarks, at which point his mainstream media backers fled in the opposite direction.

Rogan said Monday on his “Joe Rogan Experience” podcast that Hannity represented a willful and “consolidated ignorance” shared by some conservatives who agree not to “delve into the nuances of very difficult topics and to take a hard stance toward the right.”

“They saw this Bundy character as sort of this poster guy for an America that’s fed up with the intrusion of the federal government into our lives and the socialist Obama network, and Hannity jumps on board with this, and now he just looks like a complete f-cking idiot when more and more information comes out about this guy,” Rogan said.

His guest, Cenk Uygur of The Young Turks, asked Rogan to imagine if the racial roles were reversed.

“Imagine if the situation was reversed and they decided they’re not going to pay their taxes in Compton?” Uygur said. “Reverse the races, OK, and then they’re like, if the government comes here to collect their taxes, fees – whatever – all the black folks in Compton are grabbing their guns, and then they’re going to point them at the federal government and make them back down. What do you think Hannity’s reaction to that would have been?”

Rogan said many Americans initially sympathized with Bundy because of their instinctive affinity for farmers as “the backbone of America,” but he said it’s actually “a big, f-cking, long complicated tale.”

“You can’t describe it in five minutes and you can’t break it down to a guy like Sean Hannity that has, like, a billion other f-cking things on his mind,” Rogan said. “He just sees it as a category – oh, it’s on the right, right support white people, they don’t want Obama, we got a black president, f-ck yeah, run with it.”

“One of my big surprises when I got into the talk show world was how stupid Sean Hannity is,” Uygur said. “Honest, because when I went in, I thought, ‘Look, if I make it on TV and I debate someone like Sean Hannity, I’ve really got to come correct. I’ve got to make sure I’ve got all my information.’”

But The Young Turks host said he’s been listening closer to the Fox News pundit and has come to realize Hannity displays little understanding of any issue.

“He’s just going from one talking point to another,” Uygur said. “He’s another news actor, but he’s paid to be, like, a conservative Republican propaganda news actor.”

Uygur said some conservatives, such as Ron Paul, make some logical sense even when he doesn’t agree with their ideas, but that’s not the case with pundits like Hannity.