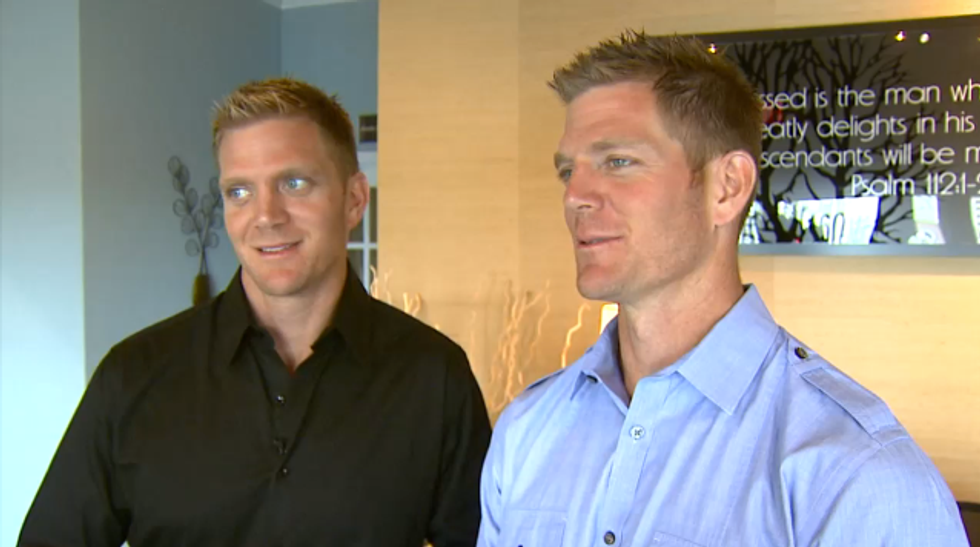 Conservative Christians are urging HGTV to resume production of a new reality show featuring twin brothers who have made public statements against LGBT people, Muslims, and other groups.

The cable network announced last month that David and Jason Benham would star in a reality TV series, “Flip It Forward,” that was scheduled to premiere in October.

But Right Wing Watch reported Tuesday on the pair’s political activities, which includes a prayer rally they organized outside the 2012 Democratic National Convention, work to promote a constitutional amendment banning same-sex marriage in North Carolina, and published columns comparing same-sex marriage to Nazi Germany and calling Muslims enemies of America.

HGTV abruptly canceled the show Wednesday, shortly after Raw Story and other media outlets sought comment on the brothers and their past statements and actions – which are easily found in an Internet search.

The pair released a statement saying that anyone who suggested they hated any one or any groups was “misinformed or lying.”

“Over the last decade, we've sold thousands of homes with the guiding principle of producing value and breathing life into each family that has crossed our path, and we do not, nor will we ever discriminate against people who do not share our views,” the brothers said in a statement.

A conservative Christian consumer advocacy group that has protested the recent “Noah” movie and backed another reality TV show star who was briefly suspended for his own anti-LGBT remarks, launched a Twitter campaign to reverse HGTV’s decision.

Faith Driven Consumer has asked like-minded social media users to use a hashtag campaign to pressure the cable network, owned by Scripps Networks Interactive, to #FlipThisDecision.

“This project has come to a screeching halt simply because the Benham brothers hold a biblical view of life and marriage,” the advocacy group said in a statement. “This is pure intolerance, discrimination, and bullying toward those who hold to widely held and legitimate views. HGTV’s rash actions hold no place in America’s rainbow of diversity.”

The group also launched the #IStandWithPhil campaign to support “Duck Dynasty” star Phil Robertson, who was suspended from the popular A&E reality TV series in December after he made disparaging remarks about gay people and expressed nostalgia for the “Jim Crow” era in a published interview.

“Whether people agree or disagree with the Benham’s faith-driven perspective is beside the point,” said Chris Stone, of Faith Driven Consumer. “The Benhams have a right to have those views and to be treated equally with those who hold to other viewpoints. This is the very definition of tolerance.”

The brothers said in a statement that they were saddened by HGTV’s decision.

“With all of the grotesque things that can be seen and heard on television today, you would think there would be room for two twin brothers who are faithful to our families, committed to biblical principles, and dedicated professionals,” the statement said. “If our faith costs us a television show, then so be it.”