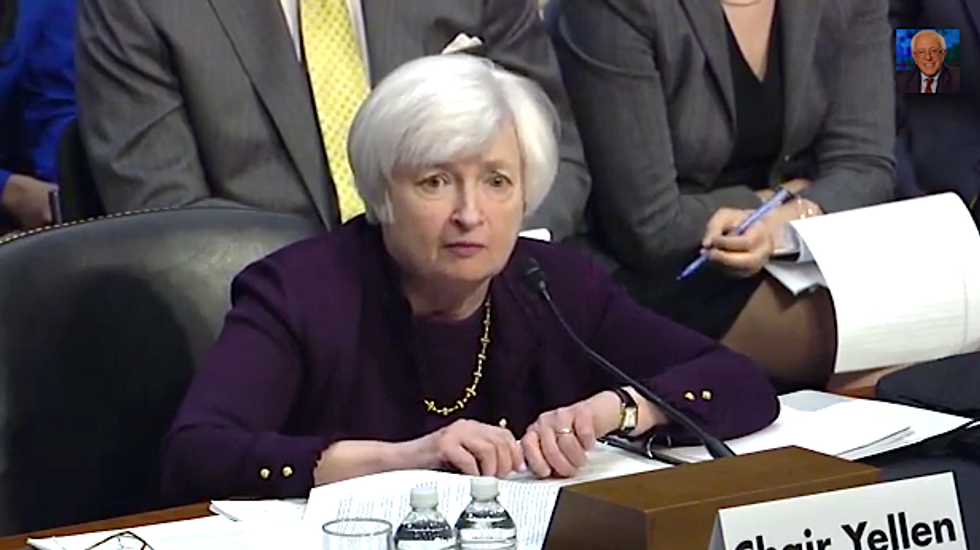 The Federal Reserve chair told Sen. Bernie Sanders (I-VT) that she shared his concerns about wealth inequality and its distorting effects on democracy, but she declined to offer any solutions.

Sanders pointed Wednesday during a Joint Economic Committee hearing to a recent study that found corporate interests dominated politics at the expense of ordinary citizens, and Fed Chair Janet Yellen said she agreed.

“All of the statistics on inequality you’re cited are ones that greatly concern me, and I think for the same reasons that you’re concerned about them,” Yellen said.

She said money was often the deciding factor in which voices were heard during the political process, but she stopped short when Sanders asked if the United States had ceased to be a capitalist democracy but had instead become an oligarchy.

“I prefer not to give labels, but there’s no question we’ve had the trend toward growing inequality, and I personally find it very worrisome trend that deserves the attention of policy makers,” Yellen said.

Sanders, who is mulling a 2016 presidential run as a populist progressive, asked whether Rep. Paul Ryan’s (R-WI) budget proposal calling for a full repeal of the estate tax – which he said applied to only the wealthiest 0.1 percent of American families -- would benefit middle class families.

“I share your concern with inequality, but I guess I’m going to say on this that it’s up to the Congress to decide what’s appropriate,” Yellen said. “There are a number of different ways to address it (and) that certainly is one the list.

Sanders then asked her whether it made sense to give enormous tax breaks, as House Republicans have also suggested, to the wealthiest families.

“I’ve indicated that I share your concern with inequality, but I guess I’m going to say on this that it’s up to the Congress to decide what’s appropriate, and there are a number of different ways to address it (and) that certainly is on the list,” Yellen said.

Republicans complain about the Obama administration’s “oppressive economic policies,” Sanders said, but he pointed out that that the Koch brothers had seen their wealth grow substantially in the last year while 95 percent of economic growth was confined to the wealthiest 1 percent.

He asked Yellen if she thought additional tax cuts for the Koch brothers would create more American jobs.

“Most of the evidence we have suggests that transfers to lower income people tend to be spent – a larger fraction of the dollar is spent than when there’s a transfer to a wealthy individual,” she said. “But changes in tax policy – so that’s from the demand side, (and) tax policy also has supply-side effects that one should take into account.”