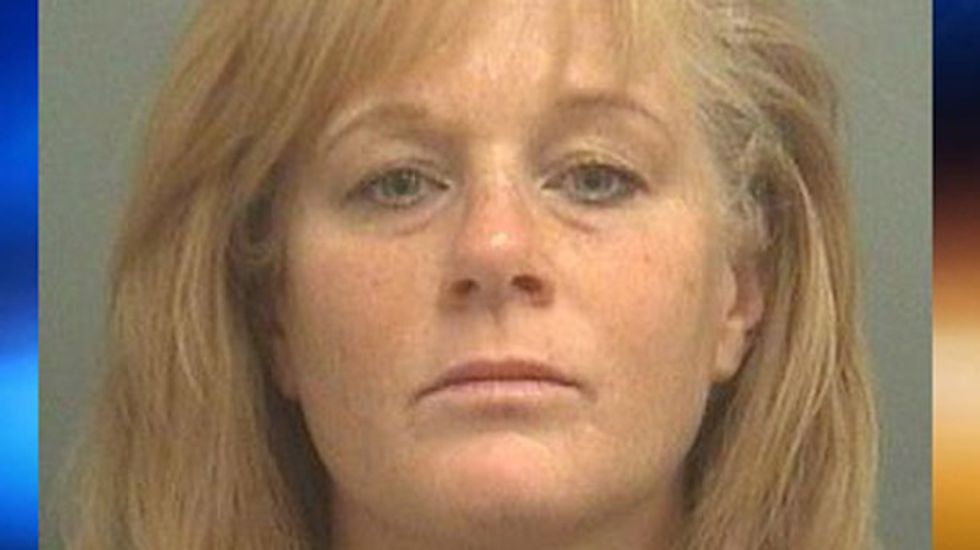 A Florida firefighter is under arrest after an attempt at a drunken hook-up ended with her shooting at a man who was trying to leave her apartment because, as he put it, " things were getting weird," according to News10.

Janeen McKenzie, a 46-year-old firefighter employed by Pompano Beach Fire Rescue, was arrested after sheriffs deputies arrived at the scene finding her standing over and pointing a gun at Anthony Santos as he knelt in the street.

According to Santos, he met McKenzie at a bar and agreed to drive her home in her car because she was too intoxicated to drive. Santos arranged for a friend to follow in another car, but changed plans after discovering that McKenzie's home was within walking distance of his apartment.

After arriving at McKenzie's home she invited Santos in for a drink, pouring a glass of wine for both of them. Santos said he took a sip of his then set it aside as they went into her bedroom and began kissing.

According to Santos, McKenzie pressed her body against him and took his hands, placing them around her neck, indicating that she found being choked arousing.

Telling deputies that he then attempted to leave because "things were getting weird," Santos followed  McKenzie into the kitchen where she poured herself another glass of wine. When he advised her that she had had enough, her demeanor changed and she had Santos open a drawer to observe that she had a handgun. Santos then began to exit the apartment.

Gun in hand, McKenzie caught up with Santos just outside her door and, while flailing her arms around, the gun went off just missing his face.

As Santos tried to walk way, McKenzie shot the asphalt by his feet several times, demanding that he kneel down on the ground. Santos complied, telling authorities that he thought, "Oh my God. I'm going to die over something so fucking dumb." McKenzie then fired once more into the asphalt just as police arrived.

Police ordered McKenzie to drop her weapon and took her into custody.

She told police that she didn't remember much of what had happened, but that Santos had been "choking the shit out of her on the bed" and she was afraid.

Observing no bruising or marks on her neck, and smelling alcohol on her, officers arrested McKenzie on a charge of aggravated battery with a deadly weapon.

Santos was taken to a nearby hospital to be treated from facial bleeding as the result of bullet fragments.