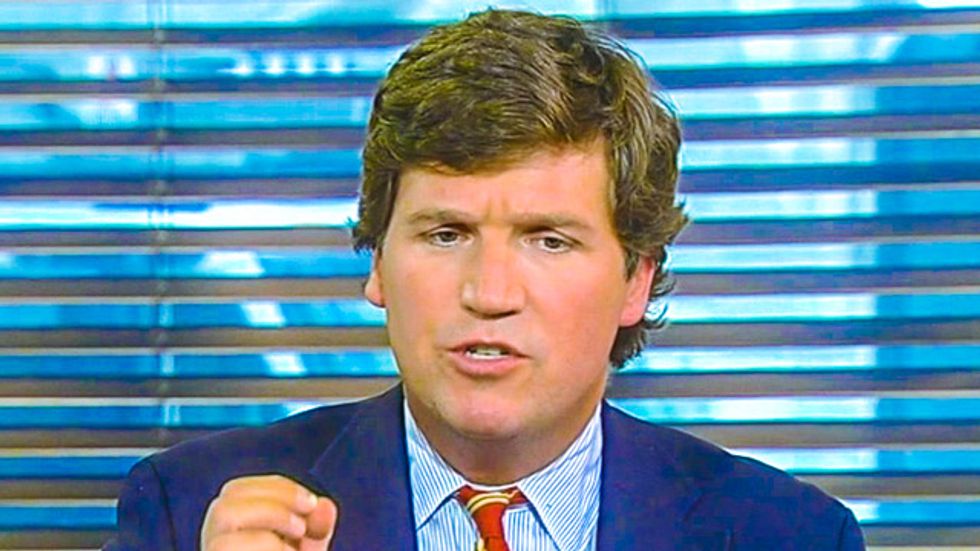 Fox News host Tucker Carlson on Tuesday asserted that men were not living up to their "manly responsibility" by letting women pay for dinner and by not participating in activities like hunting.

British TV host Bear Grylls opined at a recent luncheon for his new adventure reality show that manliness was in crisis because the modern man was relying on technology instead of "your spear, your brains, your resourcefulness, your courage."

"I think this is real," Carlson agreed on Tuesday's edition of the Fox News show Out Numbered. "Part of it is somebody told boys when they were little, 'Be sensitive, be thoughtful.' And some of that's fine, too much of it makes you pretty unattractive to women. And this is one of the reasons, because it suggests weakness."

"I blame it on the feminist movement," Fox News host Katie Pavlich remarked. "Because the feminist movement for decades has told men not to embraces their manliness, that is part of the patriarchy of our society. And that being a man is a bad thing. And that you should downgrade your manliness. And saying 'man up' is not acceptable because manning up is not based on gender."

"They have all these things where they take the man part out of being a man," she added. "And then we wonder why men don't act like men anymore."

Carlson argued that men did not necessarily need to hunt and fish to be masculine.

"Men, who on the second date, let their date pay for dinner, I'm sorry that's disgusting," he insisted. "And I don't care. The new norms are -- he shouldn't allow it. Period."

Co-host Sandra Smith pointed out that men could show respect for women "and not assume that he's the macho man" who needs to pay for dinner.

"He should be the macho man," Carlson shot back. "He ought to have respect for himself. Are you kidding? Let a girl pay? What are you joking?"

In recent days, Fox News has aired multiple segments suggesting that "female breadwinners" could be a "problem.”

“Isn’t there some sort of biological, innate need for me to be the caveman?” host Clayton Morris wondered over the weekend. “Go out and bring home the dinner. Is it emasculating if we don’t do it?”

Host Elisabeth Hasselbeck followed up on Tuesday by asking, “Are female breadwinners a recipe for disaster?”

Watch the video below from Fox News' Out Numbered, broadcast May 6, 2014.