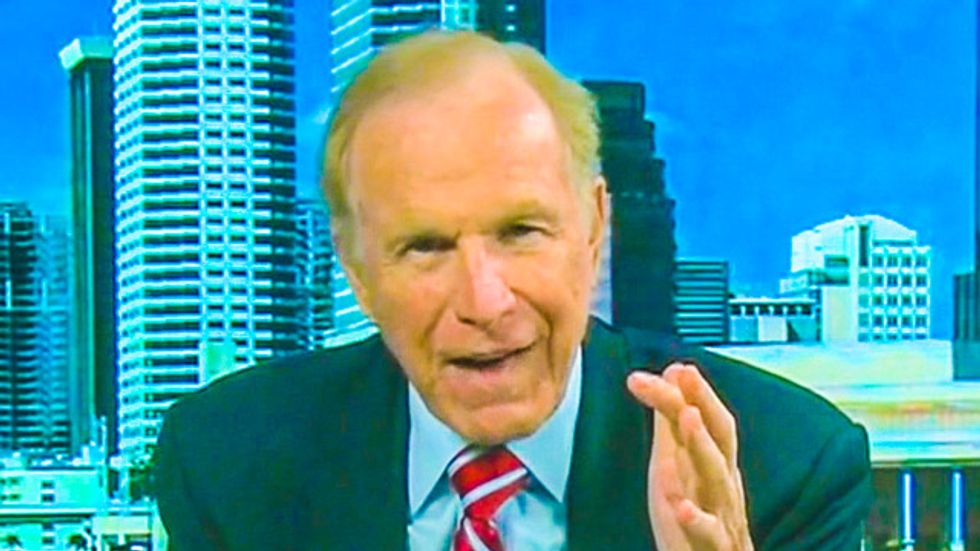 A panel on the Fox News Saturday business show Cashin' In entertained the thought of a hypothetical assassination of former Secretary of State Hillary Clinton on Saturday to assert that the media did not place enough focus on her comments about Benghazi, which the group took out of context.

Host Eric Bolling waited until the second segment of the weekly business-focused show to blast President Barack Obama over a recently-released email that the network has made a cornerstone in the assertion that the White House covered up the cause of the Benghazi terrorist attacks.

But Fox News contributor Juan Williams responded by pointing out Republicans were insisting that Benghazi was a scandal to derail Clinton's presidential ambitions.

Jonathan Hoenig of CapitalistPig.com accused Clinton of "an anti-Americanism" for comments during a Senate Foreign Relations Committee hearing last year, in which she had asked, "What difference does it make" if the attacks were ignited by a protest or for some other reason.

"The upshot is that you, as in individual, your life doesn't mean anything," Hoenig said.

In case taking Clinton's comment out of context didn't make the point, Fox News pundit Wayne Rogers decided to take the argument to an extreme.

"Imagine the following," he said. "Imagine that Hillary Clinton runs for president, and gets assassinated in the process."

"And somebody shows up, a congressman, and says, 'Well, what difference does it make anyway?'" Rogers quipped. "I mean, The New York Times would have that on the front page!"

"They would have a field day," Bolling agreed.

"She said, 'What difference does it make anyway?'" Roger shouted, waving his finger at Williams. "That's what she said!"

"We ran out of time, I would love to have a little bit more time with that one," Bolling said as he concluded the segment.

Media Matters' Oliver Willis pointed out on Saturday that Clinton's comments had, in fact, been "a direct rebuttal to the ongoing conservative obsession with the set of talking points, which were subject to changes made based on intelligence assessments available at the time."

"Clinton was accurately noting during her testimony that given the ongoing efforts to capture those who were responsible for the attacks and to provide security for U.S. consulates and embassies, the bureaucratic details of who edited a government memo were trivial at best," Willis wrote. "The odd juxtaposition of a theoretical assassination attempt with this ongoing discussion comes as Fox tries to breathe new life into the Benghazi hoax, by resurfacing long-debunked and answered questions."