John Oliver: Death penalty, like the McRib, is 'tantalizing’ yet ‘epically wrong’ 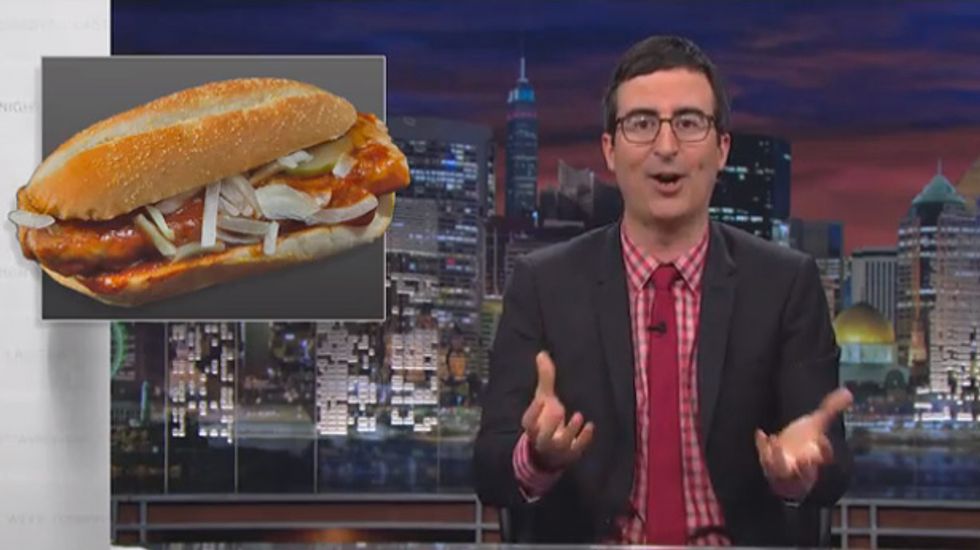 On just the second episode of his new HBO comedy news show, Last Week Tonight, host John Oliver took on the decidedly unfunny subject of the death penalty and society's desire for it, comparing it to McDonald's McRib: "tantalizing" yet "epically wrong."

After showing video of President Barack Obama discussing the botched execution of Oklahoma death row inmate Clayton Lockett this week, Oliver promised to share a viral videos of tiny hamsters eating tiny burritos if viewers stuck with him through the difficult subject.

Asking for  a "broad, almost infantile" explanation of the death penalty and when  it is appropriate, Oliver showed video of former Bush administration Attorney General Alberto Gonzalez explaining that he believes in administrating the death penalty, but "only to those who are guilty of commiting the crime,"

"Okay," Oliver agrees. "Bold idea. We shouldn't execute innocent people. I think most people would agree with that. You, sir, are a regular Atticus Finch."

Acknowledging that he approaches the idea of the death penalty as an outsider since Britain has outlawed it, Oliver admits that before it was abolished in 1965, "We didn't just have capital punishment, we literally went medieval on people's asses"  before showing a clip explaining that Britain boiled murderers alive, and burned them at the stake.

"Yeah. We did that. We boiled people. And in the grand tradition of British cuisine, if anything, we over-boiled them," he explained before adding, "I know that is all of this is technically horrifying, but that's kind of the point. Because whether you are boiling people alive, or putting them to sleep with a tiny injection administered by a puppy dressed as Winnie the Pooh, in the end you are getting the same result."

Pointing out that recent polls in Britain show a majority would like to have the death penalty back, Oliver agrees  that "the death penalty is one of those things that is natural to want, but you shouldn't necessarily have."

"The death penalty is like the McRib," he explains. "When you can't have it, it's so tantalizing. But when they bring it back, you think 'this is epically wrong'."

Watch the video from HBO below: