Jon Stewart rips GOP and Fox: Where was your 'outrage and sanctimony' over Iraq? 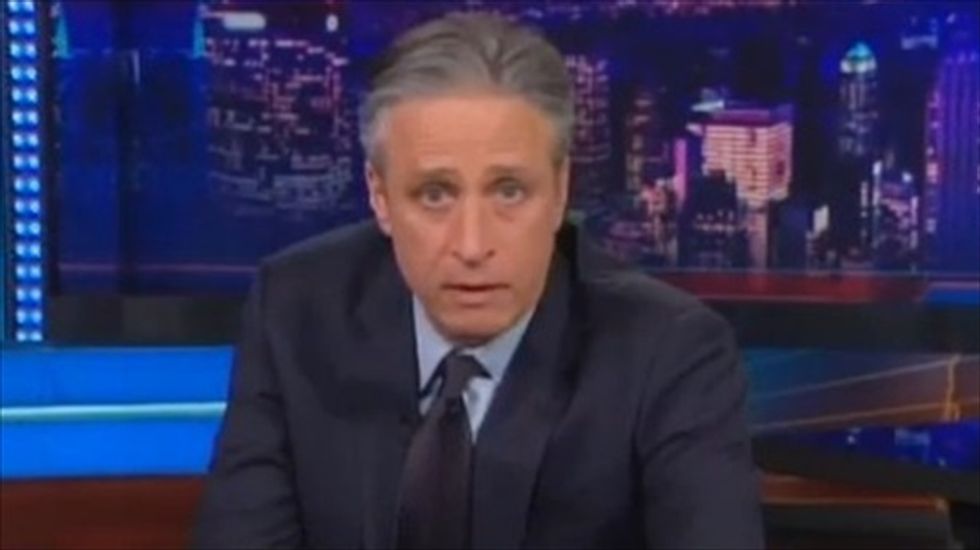 Daily Show host Jon Stewart scolded Fox News and Republicans on Monday for expecting the same level of anger from the rest of the country regarding the deadly September 2012 attack at a U.S. installation in Benghazi, Libya.

"If I may say, your hypocritical outrage and sanctimony aside, the reason it's hard for everybody to get outraged by this terribly tragic and ultimately preventable disaster that was Benghazi is that everybody in this country has seen this movie before. Only that movie was on an IMAX."

The latest round of rhetoric concerning the attack, Stewart explained, was a report from a conservative outlet saying a White House aide's email called for then-United Nations Ambassador Susan Rice to go on network talk shows and refer to the protest leading up to the attack -- which killed Ambassador Christopher Stevens and three other Americans -- as being tied to an Islamophobic video.

After showing clips of various Fox personalities demanding to know where the "outrage" was and accusing the "mainstream media" of giving President Barack Obama "a pass," Stewart said they were attributing the lack of attention to the story to popular ignorance.

"That after hundreds of cable news stories about Benghazi, 13 congressional hearings, 50 further congressional briefings, and 25,000 pages of official findings concerning what happened in Benghazi, that if we all only knew about it, we would care," he said.

But while focusing on the intelligence failure that failed to save lives in Benghazi, Stewart illustrated through clips and on-screen displays, Fox had also spent years downplaying similar failures related to the Iraq War, fought by Republican President George W. Bush's administration.

"Imagine the outrage if there had been a second intelligence failure right after that one that tragically led to even more Americans losing their lives," Stewart said. "But you're not concerned about that. You're just concerned about this one intelligence failure. You're upset that an administration, in its haste to get re-elected, pulled some dodgy, face-saving sh*t. That's what you're afraid of."

Specifically, Stewart pointed to interviews given by then-Vice President Dick Cheney, then-Secretary of State Colin Powell and then-National Security Advisor Condolezza Rice on Sept. 8, 2002 -- the same day a story planted by the Bush administration ran in the New York Times, allowing them to bring up a non-existent threat of Iraq looking to buy "high-quality aluminum tubes that are really only for nuclear weapons programs."

"They knew a year in advance that what they were saying on the show that day was not true," Stewart said of the administration officials. "Where was the outrage?"

Watch Stewart's commentary, as posted by Crooks & Liars on Monday, below.