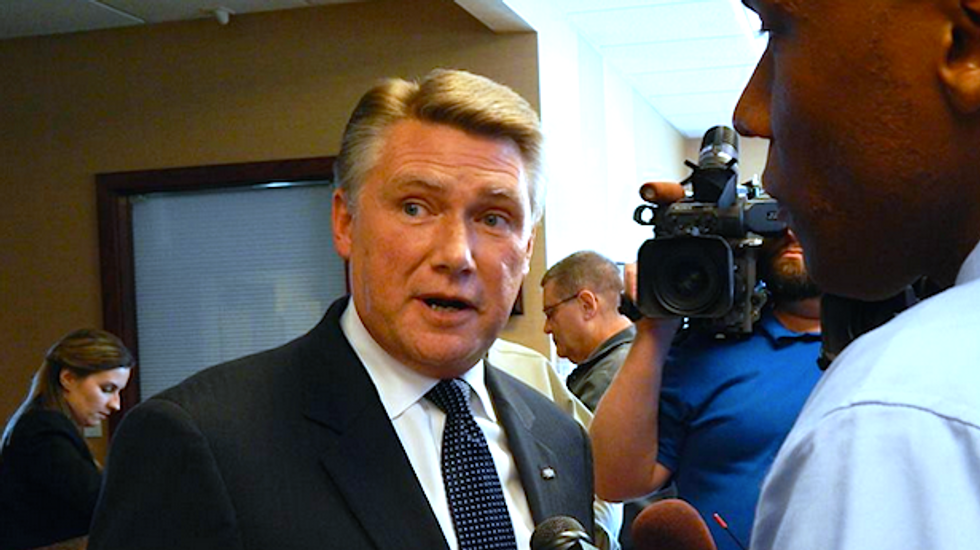 WRAL-TV reported that Harris, a Tea Party favorite, has been preaching at churches throughout North Carolina after taking a leave of absence from his own First Baptist Church in Charlotte during his Republican primary campaign.

"When I get up the preach often times, I'll get up and say, 'I realize the pastor, when he introduced me, said Mark is now running for U.S. Senate,'" Harris said. "I always get up and say, 'That is true, and (my wife) Beth and I are on this journey, and if you want to talk with us afterwards, you're more than welcome to. But I've come here to do what I do, and that's the preach God's word.' And I did it just yesterday, three times on Sunday morning."

He preaches that the United States has fallen into moral decline, and he says during campaign stops that he would legislate from the same mindset that he holds as a Christian preacher.

"I've spoken to those things the Bible deals clearly with, on issues of sanctity of life, sanctity of marriage," Harris said. "I think the Bible speaks to the issue of debt and the biblical principal of national debt and the gross immorality we're doing with $17.5 trillion of debt we're leaving on the backs of our children and grandchildren."

Churches frequently take up collections for traveling preachers, but religious institutions are typically nonprofit organizations that are prohibited from endorsing or financially supporting candidates – who are required to report campaign donations.

The TV station posted a video online showing a collection taken up for Harris following a January sermon at Blackwelder Park Baptist Church in Kannapolis, N.C.

"We're going to take an offering for Dr. Harris, for his coming and preaching, also for whatever you want to do otherwise for supporting him in this campaign," said Rev. Bill Saylor in the video. "I hope you will think about it. He has some materials in his car. If you would like to get more materials and pass them out and thereby get better known in this area, and then when the primaries come, you and all of your friends can vote for him. Amen?"

WRAL reported that Harris had not reported any of the church donations as campaign donations during his most recent campaign finance statement, but he told the station the collections were not big revenue sources.

"Some churches haven't given me anything, quite frankly," he said. "Often time, to be honest with you, a love offering doesn't even cover my mileage.”

But those contributions might still violate the law, according to campaign finance experts.

"If it's in the context of referencing him as a candidate, that seems problematic," said Bob Phillips, director Common Cause of North Carolina.

But Harris, who is running a competitive race ahead of Tuesday’s GOP primary against state House Speaker Thom Tillis and Dr. Greg Brannon, dismissed the concerns.

"I would be concerned about politicking in the pulpit too, but that's not what we do," Harris said, standing just to one side of a sign marking the “no campaigning” zone outside the Wake County Board of Elections office.

The winner of the Republican primary will face off against the incumbent Democratic Sen. Kay Hagan.