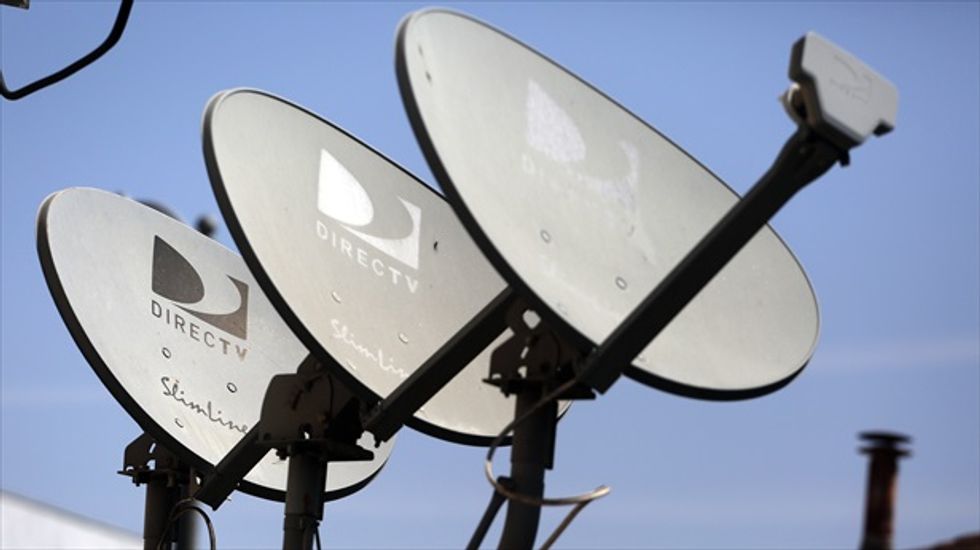 By Liana B. Baker

(Reuters) - AT&T Inc can pull out of its agreement to buy DirecTV if the satellite TV operator is unable to renew a deal with the National Football League to offer the popular NFL Sunday Ticket football package, according to a regulatory filing on Monday.

The current DirecTV offer allows subscribers to watch football games outside of their local markets on Sundays. The exclusive package, which costs subscribers up to $300 a year, is an important tool for DirecTV to attract subscribers and the company has said about 2 million people receive the service.

In a filing related to the acquisition, the companies said: "the parties also have agreed that in the unlikely event that the company's agreement for the 'NFL Sunday Ticket' service is not renewed on substantially the terms discussed between the parties, AT&T may elect not to consummate the merger."

Investors have been watching closely to see whether DirecTV would renew the Sunday Ticket contract with the NFL, estimated to be worth $1 billion annually, with the potential to rise in value as part of a new agreement.

The filing said that if a renewal isn't struck, AT&T will not be able to claim damages as long as DirecTV used its best efforts to get a deal done with the NFL.

On a conference call with analysts on Monday, DirecTV CEO Mike White said he and AT&T Chief Executive Randall Stephenson had spoken with NFL commissioner Roger Goodell as well as New England Patriots Owner Robert Kraft who heads the league's broadcast committee, and the parties were in "positive and constructive" discussions with the league.

"I am still highly confident that we are going to get our deal done," White said, adding he expects a pact to be agreed by the end of the year, which would be before the acquisition closes.

AT&T has said it expects the deal to take a year to close.

A DirecTV spokesman said the company was "totally comfortable" with including the Sunday Ticket condition in the merger agreement.

"DirecTV has been telling the world for months that we are comfortable that we will complete the NFL contract this year," the spokesman said.

Representatives from AT&T and the NFL did not immediately respond to requests for comment.

News of the condition may affect the negotiations between DirecTV and the league, said Neal Pilson, head of consulting firm Pilson Communications and the former president of CBS Sports.

"It gives the NFL additional leverage knowing a $48 billion acquisition is depending upon the renewal," he said.

A contract that renews DirecTV's exclusive deal would give the satellite operator a key marketing advantage over cable operators. Cable companies sought a deal in 2009, but DirecTV ended up renewing its agreement with the NFL for four years.

The current agreement is due to expire at the end of the 2014-15 season, meaning there is one season to go under the previous terms.

[Image: DirecTV satellite dishes are seen on an apartment roof in Los Angeles, California May 18, 2014. By Jonathan Alcorn for Reuters.]