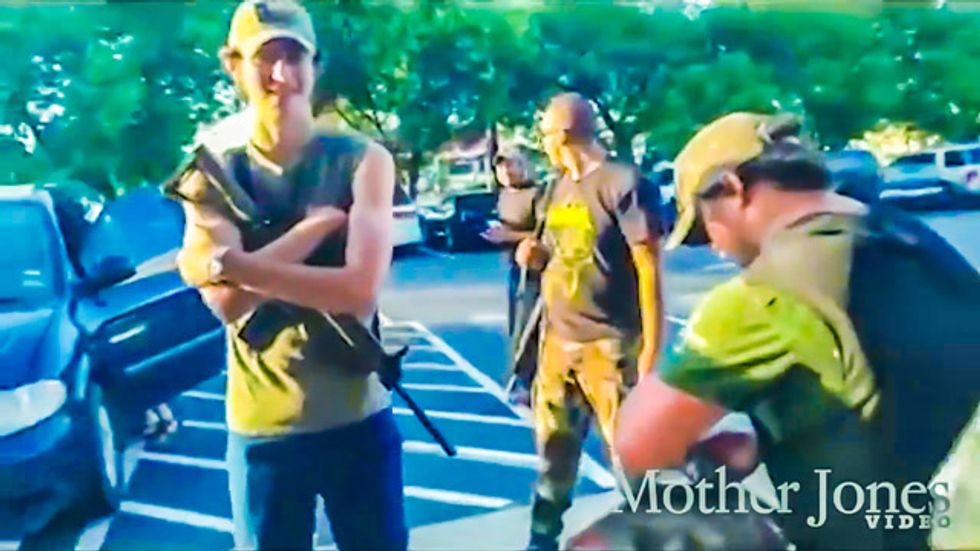 A group of gun activists in Nebraska expressed outrage at "anti-gunners" after a steakhouse said it could not accommodate a large group of people openly carrying firearms.

According to the Omaha World Herald, members of Nebraska Open Carry had planned to eat at Texas Roadhouse at Shadow Lake Towne Center on Thursday.

On Tuesday, Steve Jackson, who is the restaurant's managing partner, accused the group of not being clear about its intentions to openly carry firearms, and said that members would not be welcome if they did.

“I want to feed people — not have a circus in here,” Jackson explained.

Nebraska Open Carry organizer Nick Crawford lashed out at Texas Roadhouse for infringing on freedoms guaranteed in the Second Amendment.

“We live in America, and obviously people are free to feel however they want to. I love that. It’s wonderful,” Crawford opined. “But if it comes to another right, carrying guns, then they can shut us down because people call and complain."

“It always seems like the anti-gunners always get their way instead of the pro-Second Amendment people," he added. "That, to me, it’s getting old.”

Travis Doster, a national spokesperson for Texas Roadhouse, told the World Herald that the company's policy had nothing to do with gun rights, and everything to do with being a successful business.

"This particular group wanted to bring a dozen or so people and, I’m not sure how the word got out, but suddenly different people were calling and different businesses and media and it became a much bigger issue,” he pointed out. "The intent was to try to serve steaks to somebody, and it got beyond its original intent."

But after getting calls from the Papillion Police Department, Shadow Lake’s property management and Nebraskans Against Gun Violence, the company concluded that having a group of people toting firearms in its restaurant was “not good for business.”

“I know they have their agenda. I really like to stay neutral. This thing is not a neutral issue. It’s not good for business,” managing partner Steve Jackson noted.

The pro-gun activists said that their Thursday meeting has now been moved to Nettie’s Fine Mexican Food in Bellevue, which reportedly supports openly carrying firearms in the restaurant.

The group Open Carry Texas was recently banned from two restaurants -- Chili's and Sonic -- after its members showed up with assault-style rifles. And the Chipotle chain released a statement clarifying that guns were not welcome in its restaurant because activists staged a demonstration, frightening the customers.

Update: In an statement provided to Raw Story, Nebaskans Against Gun Violence said that it had opposed the open-carry carry meeting because more guns was not the way to make America safer.

"The evidence is quite clear that guns in public in the hands of people with little training or vetting make us less safe and less free," Nebaskans Against Gun Violence argued. "Armed civilians have stopped zero mass shootings in the last 30 years, but so far in 2014 they have caused hundreds of accidental shootings, including several in businesses that allow guns. There is a legitimate role for guns in our society, but this isn't it."

The statement added: "The whole guns everywhere movement is predicated on a historically ignorant understanding of the Second Amendment. The founders wanted to provide for the national defense. They did not want to threaten violence against the elegant democracy they had just created, and they certainly did not intend to militarize our daily lives."

Watch the video below of Open Carry Texas being kicked out of Chili's.

[Ed. note: This report had been updated to correctly identify the group of activists as Nebraska Open Carry]