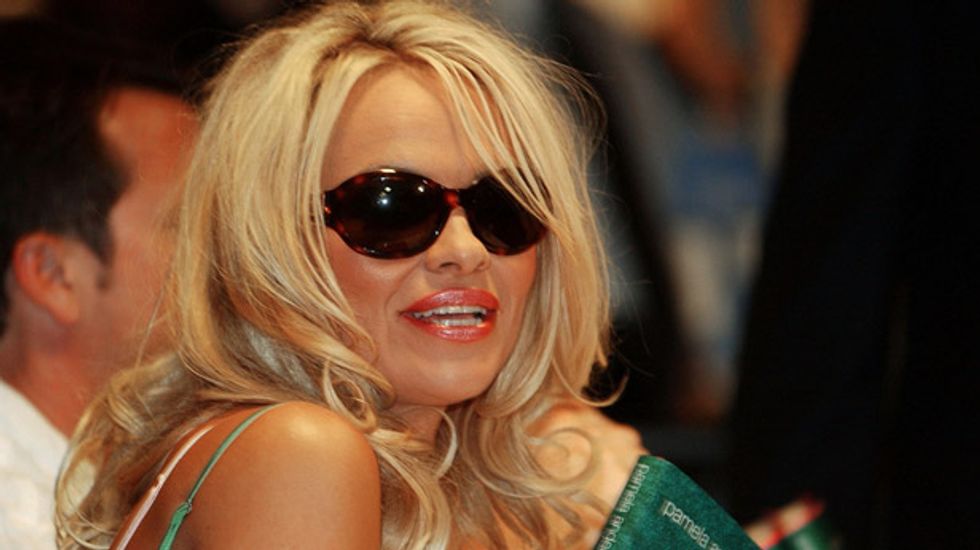 It was a backgammon contest like no other. It started with a bleak confession of child abuse from one of the world's most recognised sex symbols and ended with a rallying cry from Dame Vivienne Westwood, calling for a complete change in the financial basis of world economics. Strangest of all, it took place on the beach at Cannes during the film festival.

Pamela Anderson, former star of Baywatch, held the backgammon competition at a beach party to mark the launch of her new animal charity, the Pamela Anderson Foundation. She began with a speech to explain her love of animals that caused gasps of sympathy from her guests. Reading from carefully prepared notes, she said: "I feel now might be the time to reveal a few of my most painful memories. At the risk of over-exposing myself, again, or being inappropriate, again, I thought I might share with you why I am doing this."

Anderson's confession was one of the by now customary unpredictable events at the film festival. Each year Cannes can be relied on to create unexpected news stories that have nothing to do with the films being screened. So far this year, Cannes has witnessed a large model dragon pulled around the bay to promote a new How to Train Your Dragon film, Cate Blanchett roundly upbraiding the media for the coverage women get on the red carpet, and the Ukrainian red carpet prankster Vitalii Sediuk putting his head up the skirts of the long white dress worn by actress America Ferrera.

On Friday night, Anderson, speaking to guests at one of Cannes' many beach venues, described a series of sexual assaults that took place during her childhood, starting with an account of being "molested" by a female friend of the family in her own home.

"I went to her boyfriend's house," Anderson continued, and his older brother decided to teach me backgammon, which led into a back massage, which led into rape – my first sexual experience. He was 25 years old and I was 12." Despite suffering from nerves and a failing microphone, Anderson, 46, went on to describe how her first boyfriend then organised her gang rape.

"This meant I had a hard time trusting humans," she said. "My parents tried to keep me safe, but to me the world was not a safe place. My dad was an alcoholic, my mum worked two jobs, my mum was always crying, dad didn't always come home." She was saved, she said, by her feeling for animals.

"It came to me naturally. The trees spoke to me. My loyalty was with the animal kingdom and I vowed to protect them and only them.

"I prayed to the whales with my feet in the ocean, my only real friends until I had children."

Rick Saloman, the husband Anderson married for a second time in January, then joined her at the backgammon tables where guests had paid to take part.

The event raised more than $150,000 for her friend Westwood's favoured charity, Cool Earth, and marked the launch of Anderson's charity, which aims to support organisations working "on the frontlines of human rights, animal rights and environmental protection".

The youngest player in the tournament was Anderson's son Brandon Lee, 18, who finished in the top four.

The foundation was launched at Cannes to attract as much international attention as possible to the cause and may also have been inspired by the Riviera's strong connection with Brigitte Bardot, the other famous blonde to have a strong philanthropic interest in animals. "I did not know she had been through all of that," said Westwood after Anderson's speech. "I have known her a long time now and we are really close."

Westwood, who was joined by her husband and business partner Andreas Kronthaler, spoke to guests about her own causes after a vegan buffet and champagne. She talked about her conviction that the basis of global economics is driving both climate change and the financial crisis and she called on her rich audience to take up the challenge of finding a new way to tackle trade.

"I believe that if business exploits less of our finite materials on this planet and spends more time making better products that last long, it might help," she said. "I want to make my own work more sustainable and more efficient. I'll know when I have done it when my staff are working a four-day week. We all need more time for ourselves."

Attention was also focused on another clothes designer when Palme d'Or contender Saint Laurent was premiered in the festival's main auditorium. The second of two recent biopics about the life of Yves Saint Laurent, this time made without the approval of the couture house he founded or his former partner, Pierre Bergé, contains scenes of drug taking and explicit sex.

At a press conference after the film, French journalists asked director Bertrand Bonello if he was concerned about what Saint Laurent's family and friends would think. "We did not know about the other film when we were making this, but actually it has freed us to make the film we wanted to make," said Bonello. "No one else has seen it yet, so we don't know what they will think – but we are proud of it."