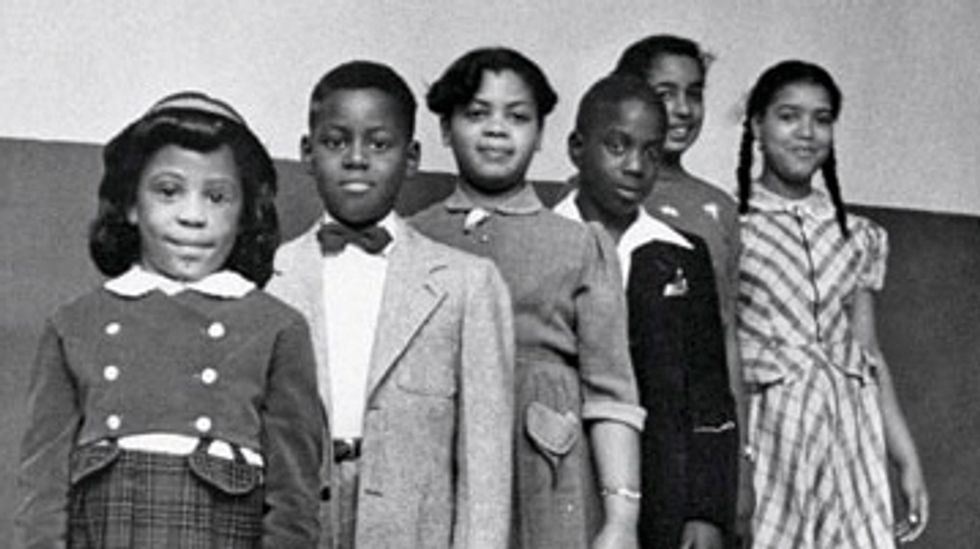 As the United States approaches the 60th anniversary of the landmark 1954 Brown vs the Board of Education Supreme Court judgement that helped outlaw racial segregation in American schools, the mainstream media has begun to confront the fact that segregated schools are not just remnants of history.

In 1957, when the governor of Arkansas refused to comply with the Brown vs Board ruling, nine African-American students became the symbol of racial integration when they were admitted to Little Rock Central High School. Paratroopers were called in to help them enter the school gates. It was a turning point in US history for de-segregating public schools.

In a HBO documentary to mark the 50th anniversary in 2007, Minnijean Brown-Trickey – one of the original Little Rock Nine – visited the school.

But the documentary captured her facing a disturbing reality, with black students and white students living in a self-segregated classroom, separated by educational opportunities and achievement.

The US Army, CC BY

Similar reports have appeared in the lead-up to the Brown vs Board of education anniversary on May 17. In a recent report researcher John Kucsera from UCLA’s The Civil Rights Project details:

New York has the most segregated schools in the country: in 2009, black and Latino students in the state had the highest concentration in intensely-segregated public schools (less than 10% white enrollment), the lowest exposure to white students, and the most uneven distribution with white students across schools. Heavily impacting these state rankings is New York City, home to the largest and one of the most segregated public school systems in the nation.

The US is experiencing a simultaneous rise in the percentages of racial minorities as well as an increase in multi- and bi-racial children. There has also been a return to segregated schools that reflect and perpetuate racially and socioeconomically segregated communities.

“The schools black children attend today, in North and South, East and West, are segregated mostly because their schools are located in segregated neighbourhoods,” explains Richard Rothstein, a researcher at the Economic Policy Institute.

Two reports in 2012, “Housing Costs, Zoning, and Access to High-Scoring Schools” from the Brookings think-tank and A Rotting Apple from the Schott Foundation for Public Education, revealed that both in New York and across the country children are experiencing social and educational inequity in their home communities and schools.

Another 2012 study in a journal published by the US Department of Housing and Urban Development concluded that young people may be “doubly disadvantaged” by growing up in poor neighbourhoods and in low-income households.

Current research confirms that race, class, home communities, and schools constitute a matrix of conditions that perpetuate both privilege and disadvantage in the US. This is despite political, public, and media claims, echoed by US secretary of education Arne Duncan, that “education is the one true path out of poverty – no matter your race, ethnicity, or zip code.”

But as political blogger Matt Bruenig concludes, data from Pew’s Economic Mobility Project shows that birth circumstances remain powerful. Bruenig says: “You are 2.5x more likely to be a rich adult if you were born rich and never bothered to go to college than if you were born poor and, against all odds, went to college and graduated.”

Along with the political failure to address racial and socioeconomic inequity directly and the lingering social inequities in access to housing in the US, another source of the return of segregated schools is a commitment to market forces as central to education reform, notably the rise of charter schools.

Analysis by the not-for-profit Albert Shanker Institute shows there is nothing about “charterness” that suggests charter schools outperform public schools. In fact, public, charter, and private schools in the US have similar outcomes when demographics of students are controlled.

Despite the promise offered by Brown vs the Board of Education 60 years ago, public schools appear unable to create the integrated ideal many claim to embrace in the US.

Back in Little Rock, segregation remains, although the contexts are different:

“Central is still pretty segregated,” says Brandon Love, the affluent student body president who is the only black person in his Advanced Placement classes, says in the HBO documentary. “It is just that we do not have to have the National Guard here to get in the school and to go to school.”

Paul Thomas does not work for, consult to, own shares in or receive funding from any company or organisation that would benefit from this article, and has no relevant affiliations.