Sen. Feinstein: GOP led committee on Benghazi is a 'hunting mission for a lynch mob' 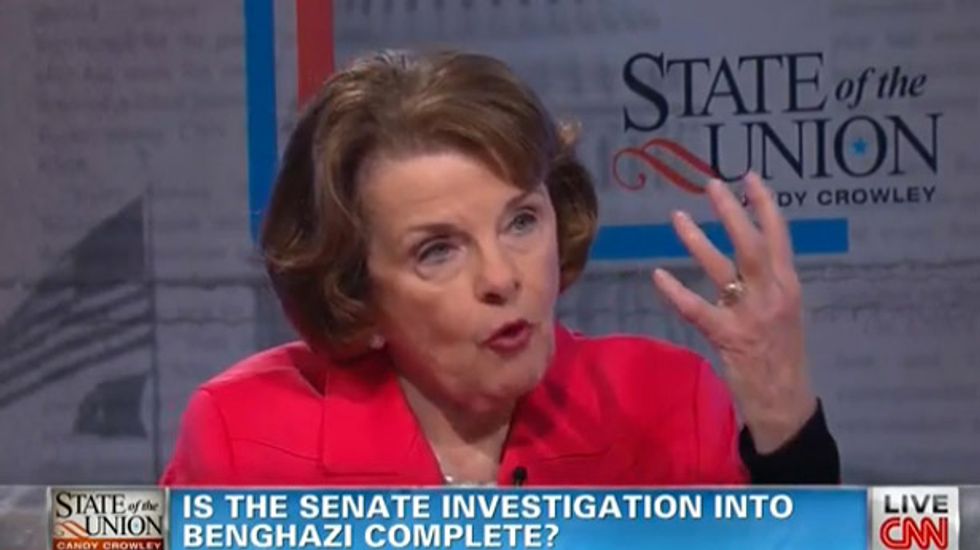 Feinstein, who served on the Intelligence committee looking into the 2012 attack, was asked by Crowley if she would go along with yet another Senate panel looking into the Benghazi. Feinstein called the latest investgation "ridiculous."

"I think it's ridiculous. I think it's a hunting mission for a lynch mob, actually. I think that's what's going on," she said. "There have been four major reports. We spent a year and a half on a report. We held hearings, thousands of pages were reviewed, the staff spent hours and weeks on it first ... that's the first thing. Homeland Security, in the Senate, did an investigation. The accountability review that came up, the Pickering-Mullen review."

Feinstein moved on, comparing the Republican response to Benghazi to the 1983 Beirut bombing attack during the Reagan administration, leaving 241 American servicemen dead.

"If you compare it to Ronald Reagan, who is the big Republican hero, and what happened in Beirut with three attacks with 240 servicemen, with seven CIA officers, with one chief of station being tortured to death ... and Reagan admitted we weren't ready for it," Feinstein said before adding, "Since then a lot of things have been done. There were faults. The intelligence was there. Action should have been taken."

Referring to the recently released email from Deputy National Security Adviser for Strategic Communication Ben Rhodes who passed along talking points put together by CIA analysts, Crowley asked if Feinstein if she believed that all of the questions surrounding Benghazi have been answered.

"I believe they have," she answered. "And they've certainly been ... Our report was bipartisan, and they were certainly answered to the satisfaction of the Intelligence Committee."

Watch the video below uploaded to YouTube by TruthRevolt: