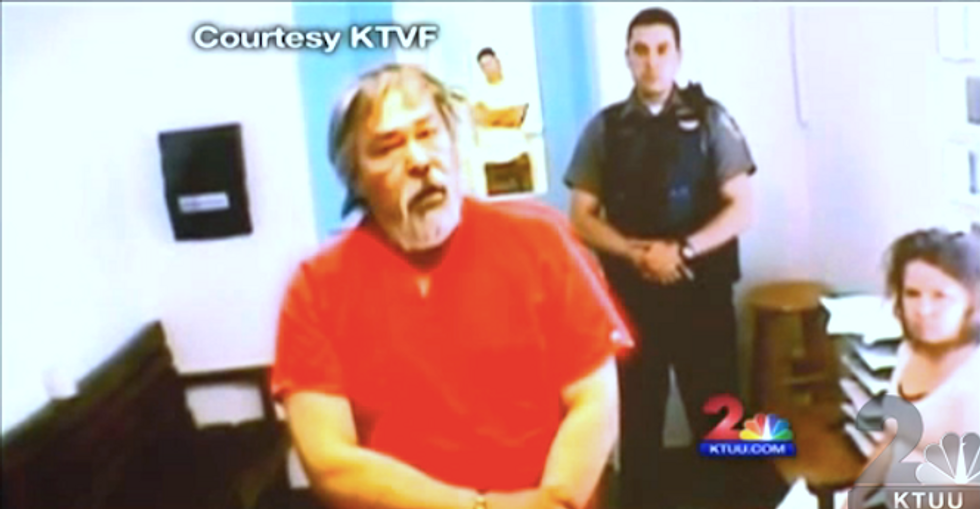 A sovereign citizen shot and killed two Alaska state troopers last week during an argument over a $150 couch, authorities said.

Nathanial Kangas is accused of killing Trooper Sgt. Patrick "Scott" Johnson and Trooper Gabriel Rich as they attempted to arrest the suspect’s father.

A mother and daughter called Tanana village police Wednesday night because they feared 58-yer-old Arvin Kangas would break into their home and steal a sofa he had sold them.

The elder Kangas told a village public safety officer that he had no jurisdiction to arrest him, and the officer called state police for backup after he said the older man made threats against him with a shotgun.

The state troopers, part of a four-person rural unit that covers 23 interior Alaska villages, went to arrest the elder Kangas on warrants for driving with a suspended license and misdemeanor assault.

They each had appeared in the National Geographic reality show, "Alaska State Troopers."

As the troopers tried to take Arvin Kangas into custody Thursday afternoon, his son went inside their house to retrieve an assault rifle, police said.

The 19-year-old Nathaniel Kangas fired the weapon seven times at close range into the troopers’ backs, said a police officer who was present during the arrest attempt.

Police said the younger Kangas immediately dropped his weapon and apologized, saying he’d opened fire because the troopers were wrestling with his father.

A friend of the Kangas family said the father and son were members, along with himself, of “The Athabascan Nation," which considers Alaska law enforcement to be a violation of Native Alaska sovereignty.

"We haven't ever been conquered and we ain't going to feel like we're conquered," said family friend Gary Albert.

He said the group distributes pamphlets about their views and hoped to find a lawyer to sue the state.

But the head of Tanana's tribal government described the Kangas men and Albert as part of a group of four “troublemakers.”

"He's been smoking too much of whatever he's got," Lester Erhart said about Albert.

A judge set bond at $4 million for Nathaniel Kangas, who was charged with two counts of first-degree murder and one count of third-degree assault. He faces up to 200 years in prison if convicted.

His father was arrested Thursday night following a SWAT team standoff on the open warrants.