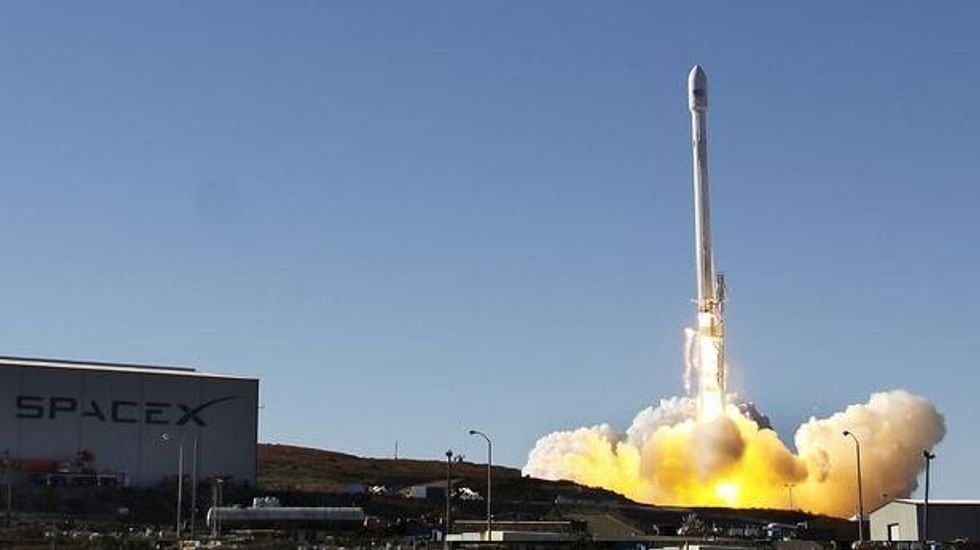 Rather than parachuting down into the ocean, the new capsule is outfitted with beefed up motors and landing legs to make precision touchdowns on land, said SpaceX founder and chief executive Elon Musk, a billionaire technology entrepreneur who also runs the Tesla Motors Inc electric car company.

"You'll be able to land anywhere on Earth with the accuracy of a helicopter ... That is how a 21st century spaceship should land," Musk said before a jam-packed audience at SpaceX's Hawthorne, Calif., headquarters.

More than 32,500 people also watched the Dragon unveiling on a live SpaceX webcast.

Lifting the vehicle's hatch, Musk settled into a reclined gold-and-black pilot's seat and pulled down a sleek, rounded glass control panel. The cabin, designed to fly a crew of seven, looked more like a Star Trek movie set than the flight deck of NASA's now-retired space shuttle.

Dragon, which launches on a SpaceX Falcon 9 rocket, is one of three privately owned space taxis vying for NASA development funds and launch contracts.

The U.S. space agency turned over space station cargo runs and crew ferry flights after retiring its fleet of shuttles in 2011. SpaceX already has a $1.6 billion contract for 12 station resupply missions. Orbital Sciences Corp has a separate, $1.9 billion contract for eight cargo flights.

NASA also has been working with SpaceX, Boeing Co and privately owned Sierra Nevada Corp on a related commercial program to develop spaceships to fly astronauts, with the goal of breaking Russia's monopoly on station crew transports before the end of 2017.

Musk hopes to bring down the cost of flying in space by reusing both the Falcon 9 rockets and Dragon spaceships.

"So long as we continue to throw away rockets and spacecraft we will never have true access to space. It'll always be incredibly expensive. If aircraft were thrown away with each flight, nobody would be able to fly ... or very few," Musk said.

NASA is expected to select one or two space taxi designs this summer for final development and test flights.