Ted Cruz: Christians shouldn't be required to do business with gay people 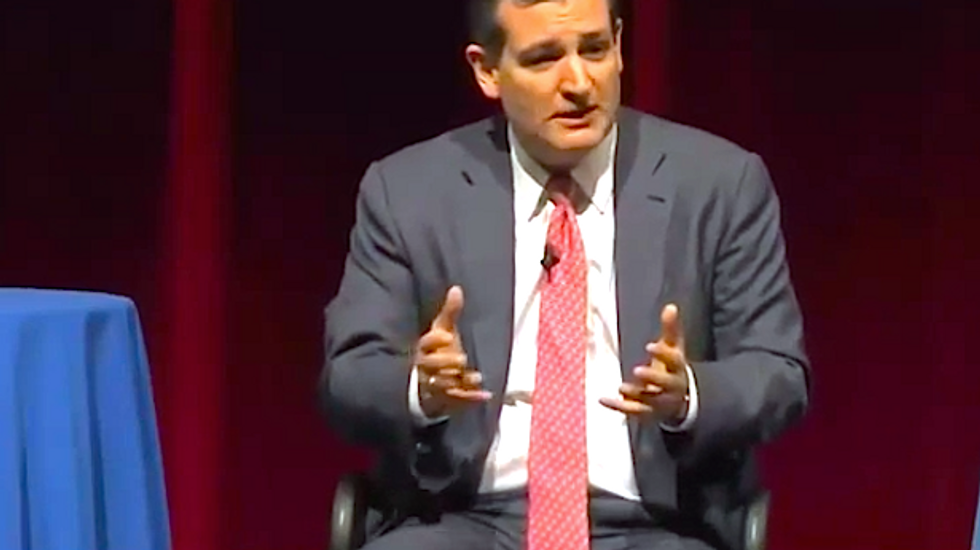 Christian business owners should be able to discriminate against LGBT people and others if they believe the Bible tells them to, said Sen. Ted Cruz (R-TX).

“Everyone has to reconcile their own faith with how they interact with others, and that’s a choice you’ve got to make based on your understanding of biblical teachings and based on the best understanding you can come to it,” Cruz said Friday at a Houston Baptist University forum on Faith in the Public Square.

The Tea Party favorite said Christians should not be forced to sell wedding cakes to same-sex couples or photograph their marriage ceremonies, although he personally had no problem doing so -- although conceded he was a terrible cook.

“I’m very much a believer that the scripture teaches that you hate the sin and love the sinner, and so, you know, from my perspective I am perfectly willing to interact with anybody,” he said. “Look, I work in the U.S. Congress. But at the same time, I don’t think the law should be forcing Americans to violate their religious faith.”

Cruz offered a pending legal case as an example.

“The Obama administration is litigating against the Little Sisters of the Poor, trying to force them, trying to extract millions of dollars of fines to force them to pay for contraceptives and abortion-providing drugs for others,” he said.

The U.S. Supreme Court issued an order Friday, several hours before Cruz made his remarks, keeping in place a temporary injunction shielding the charity and other religious groups from the requirement to offer contraception as part of employee health benefits.

“Now, these Catholic nuns don’t want to do so, and the idea that the federal government would be going after Catholic nuns, trying to force them to violate their religious faith, really demonstrates how utterly unmoored we have come from the constitutional liberties this country was founded on,” Cruz said.

Religious groups may opt out of the contraception mandate by filling out a form to require their insurers pay for such coverage, but the Catholic groups argued in their lawsuit that this effectively forced them to take part in the transaction.