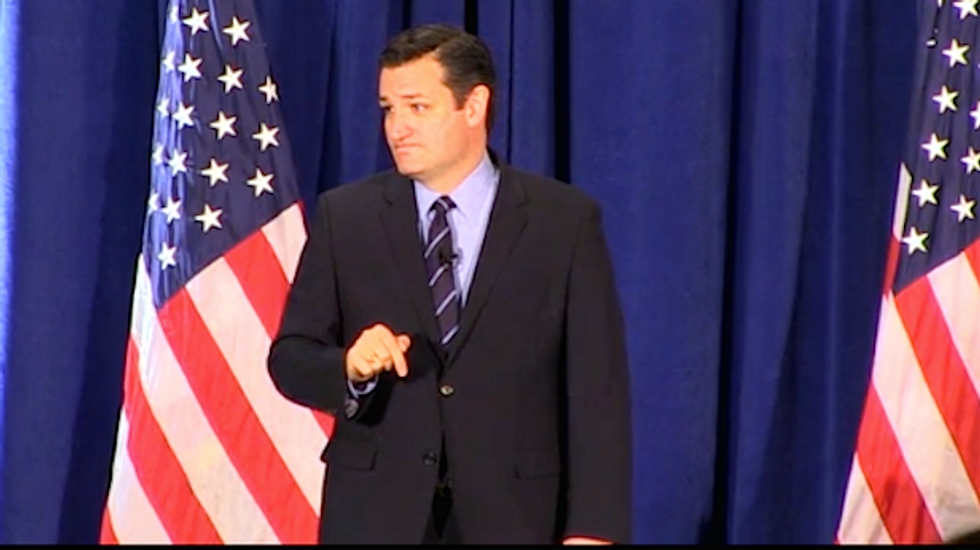 “When you think it can’t get any worse, it does,” Cruz warned at the Watchmen on the Wall gathering of pastors sponsored by the Family Research Council.

“This year, I’m sorry to tell you, the United States Senate is going to be voting on a constitutional amendment to repeal the First Amendment,” Cruz said, to the audible shock of the crowd.

The Tea Party-backed senator said Senate Democrats intend to vote this year on Senate Joint Resolution 19, which would effectively undo the unpopular U.S. Supreme Court decisions on campaign financing in the Citizens United and McCutcheon cases.

"I am telling you, I am not making this up," Cruz said. “Sen. Chuck Schumer (D-NY) has announced the Senate Democrats are scheduling a vote on a constitutional amendment to give Congress the authority to regulate political speech, because elected officials have decided they don’t like it when the citizenry has the temerity to criticize what they’ve done."

"They don’t like it when pastors in their community stand up and speak the truth,” he added.

The proposal stands virtually no chance of gaining the required two-thirds House and Senate majorities needed for approval, and is essentially an election-years stunt intended to highlight that Republicans favor unfettered funding.

“I’ll note this amendment, which has 41 Democratic senators as co-sponsors – 41 Democrats have signed on to repealing the First Amendment,” Cruz said, as an audience member loudly protests. “It explicitly says nothing in this new amendment shall abridge the freedom of the press.”

The amendment proposed by Sen. Tom Udall (D-NM) would allow the federal government and states to once again regulate the raising and spending of money in elections, as they did before the Citizens United decision.