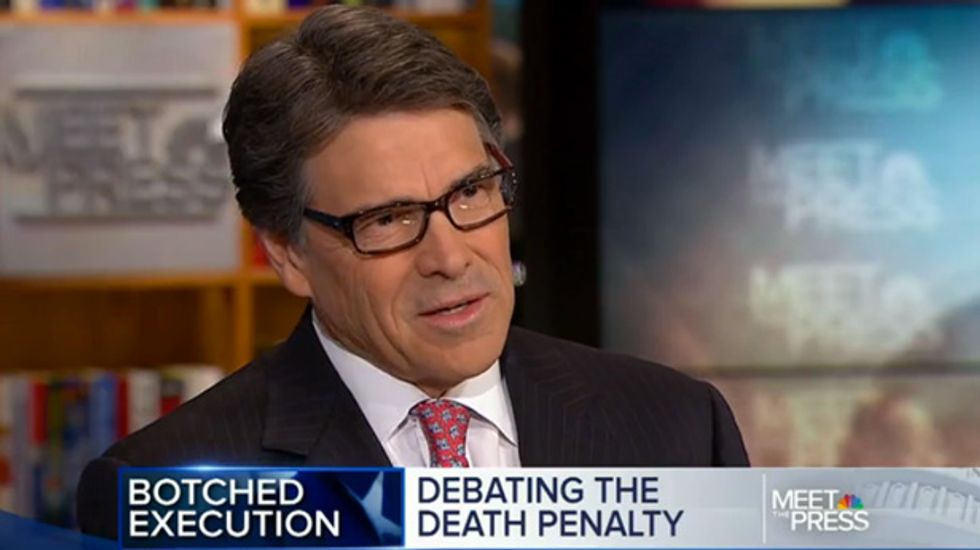 Speaking with host David Gregory, Perry addressed how the death penalty as administered in his home state, stating he felt it was both "appropriate" and "humane."

"I think we have an appropriate process in place from the standpoint of the appeals process to make sure due process is addressed, and the process of the actual execution I will suggest to you is very different from Oklahoma. We only use one drug," Perry explained."I'm confident that the way that the executions are taken care of in the state of Texas are appropriate — and humane."

Asked about the execution in Oklahoma where an untested lethal drug cocktail caused Clayton Lockett to convulse and writhe in pain before witnesses, Perry refused to go criticize the moral dimension of the execution saying, "I don’t know whether it was inhumane or not, but it was botched."

Crockett eventually died from a heart attack brought about by the attempt to execute him painlessly.

Before discussing the Oklahoma execution host Gregory pointed out that, since the Supreme Court reinstated the death penalty in 1976, "Texas has executed more than 500 people; the most in the country."

Watch the entire interview below from NBC: