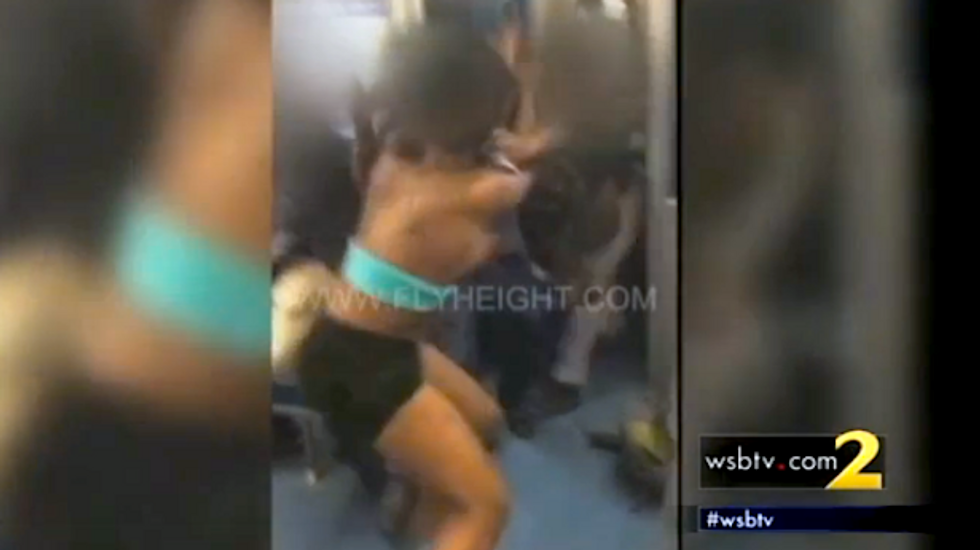 Two transgender women say they were attacked last week by several men on an Atlanta transit line as onlookers recorded video but did not intervene.

Video of the attack was shared on social media, showing the men as they verbally harassed the pair May 20 about their gender identity and began taking pictures of them with their cell phones, reported GA Voice.

“I started going off on the guy taking the photos, and he said he was going to hit me and beat me up, and I said, ‘No, you’re not,’” said Janell Crosby. “He kept on threatening me and he didn’t like certain things I said to him and he kicked me.”

Crosby’s friend was attacked and stripped naked after she came to her defense.

"They were trying to find out if we are men or women,” said her friend, Tyra Woods. “I shouldn’t have to disclose who I am to an innocent person who I’m not even interested in talking to.”

None of the other passengers tried to stop the brawl, and several recorded video on their phones while others cheered.

“It’s all over the internet and like, I’m naked,” Woods said. “I felt like since it was in a public transportation, we should’ve felt like we should’ve been secure.”

Crosby decided to move back to New York, where she has relatives, after the attack, and Woods went to Cleveland to stay with family.

“I don’t feel safe here,” Crosby said. “We don’t get no protection. There are always troublemakers.”

Crosby said she tried to report the assault to a MARTA police officer, but she said the transit cop declined to write up an incident report.

“I told one cop who was following us to the gate,” Crosby said. “He acted like he didn’t want to hear from us. He didn’t write any statement or anything.”

"That does not appear to be true," said spokesman Lyle Harris. "We have no reason to believe that was the case."

The transit authority advertises its services under the recent slogan, “Ride With Respect,” and encourages passengers if they “see something, say something.”

Crosby said she wasn’t sure why the video was so widely shared on social media.

“I really don’t know if people are viewing it for the right thing or to change the situation or laugh at it,” she said.

Luther Thomas, 34, was arrested Thursday in connection with the attack.

Police said their investigation of the attack has been hindered by uncooperative witnesses and victims.

"We did get a report that there was a fight on the train, but officers tried to speak to the victims and those involved," Harris said. "We haven't been getting the kind of cooperation that would enable us to complete this investigation more quickly."

"The City’s non-discrimination laws were recently amended with the Mayor’s full support to include gender identity as a protected class," said Mayor Kasim Reed's office in a statement.

A Kansas woman killed her abuser: At every level — in every instance — the system failed her.

Clay Wirestone, Kansas Reflector
The story of Sarah Gonzales-McLinn is one of incomprehensible abuse and personal redemption.

It’s also one of baffling, and repeated, institutional failure.

At every step, those who might have been expected to care for and protect a victim of grooming and human trafficking looked the other way. They retreated into legalistic formalities. All the while, a woman who thought she had no other option than to kill her rapist sits in prison for at least a quarter century.

'Conspiracy mastermind': Fate of former Ohio House speaker could hinge on one factor

Marty Schladen, Ohio Capital Journal
It appears that federal prosecutors have a mountain of evidence they want to present to the jury in their racketeering case against former Ohio House Speaker Larry Householder and former Ohio GOP Chairman Matt Borges.

They have emails, text messages, wiretap transcripts, and the testimony of undercover agents and confidential informants. They have so much material that U.S. District Judge Timothy Black said prosecutors and defense attorneys labored mightily before the trial even started to agree on what could be presented to the jury. The process was meant to avoid bogging down what’s already expected to be a six-week ordeal.

But all that evidence could miss the mark if none of it shows that Householder undertook an “official act” in exchange for all the millions Akron-based FirstEnergy funneled into 501(c)(4) dark money groups to support the effort to elect friendly Republicans who would vote to make Householder speaker. The U.S. Supreme Court overturned a public corruption conviction on that basis just six years ago.