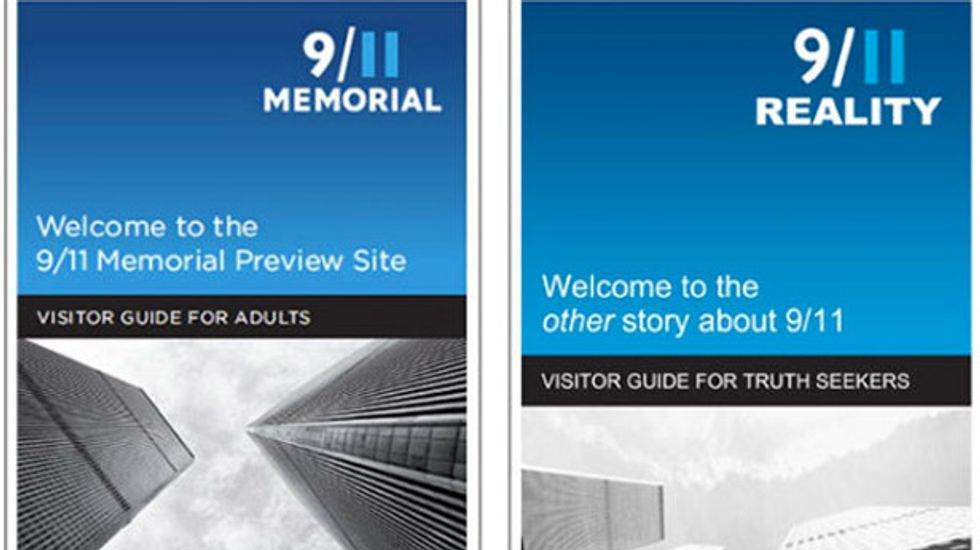 A group calling itself Architects and Engineers for 9/11 Truth will be on hand this week when the National September 11 Memorial Museum officially opens to the public in New York City, handing out brochures detailing their version of the events of September 11, 2001.

The brochures -- designed to look like the official museum brochure -- cast doubt on how the World Trade Towers collapsed that day, pushing the theory that the destruction was part of a greater conspiracy involving the U.S. government and possibly Israel.

9/11 truthers believe that the two fuel-laden planes that hit the Twin Towers could not have collapsed the buildings, and that only a controlled demolition could have caused the complete destruction.

The Village Voice notes that the brochures use virtually the same photography, colors,  and layout of the official museum brochures, but with the words "9/11 reality" in place of "9/11 Memorial," while welcoming visitors to "the other story about 9/11."

Via the 9/11 Working Group of Bloomington website, the AE911 truthers call the September 11 Museum a "elaborate, taxpayer-funded, public relations campaign to forever cement the fantastic claims of the official conspiracy theory into the history books."

They add that museum visitors will be presented with "a first-rate 'Madison Avenue' account of September 11th that has served as the justification for two wars, demolished our national economy, and deprived us of our privacy and civil liberties."

The AE911 truthers, many of whom are volunteers coming from out of state, will be handing out the mock brochures on opening day, Wednesday 5/21, and again on Saturday 5/24.

Their goal, they write is to "...inform the public as to why the 9/11 Memorial Museum is largely a fraud."