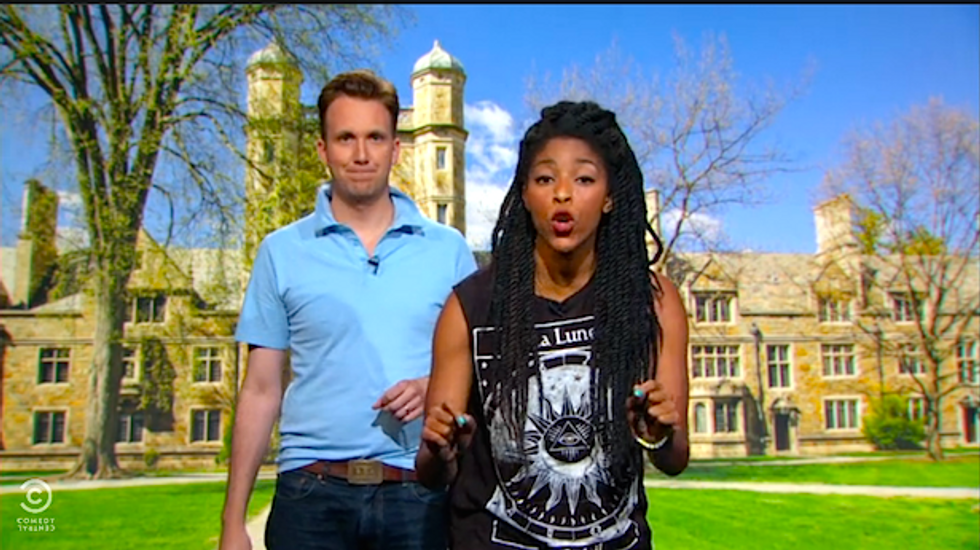 "The Daily Show" took aim Wednesday at the rape culture on American college campuses in a skit that showed the lengths women must take to avoid becoming victims of sexual assault.

“Wait a minute – ‘expelled upon graduation’? Isn’t that graduation?” Stewart said. “So no alumni tailgating, no reunions, no bringing your kids back to show them where you abused girls?”

Correspondents Jordan Klepper and Jessica Williams performed a skit that showed the stark differences between dangers faced by male students and those faced by female students.

Klepper reminded “bros” of “party commandment No. 1: “Beer before liquor, never been sicker.”

Williams, on the other hand, reminded women to never lose sight of their drink, ever. “Don’t be a doofy,” she said. “Watch out for a roofie.”

Klepper then reminded men not to pass out on the couch, because someone might draw a dick on their face.

“Yeah, do not pass out on the couch, ladies,” Williams said. “Someone will put their dick on your face, at a minimum.”

After Klepper suggested that men should take a taxi cab instead of driving drunk, Williams outlined a litany of preventative measures women must take to avoid assault by cab drivers.

“Don’t get in a cab with doors that lock automatically,” she said. “You want to ride with one hand on the door handle and the other on your friend so you can break her fall if you need to jump and roll. When you’re in the cab, follow your route on Google maps. If the driver makes a weird left turn, drop a pin on the map, call 911, and get ready to jump. Girl, you in danger!”

Klepper asked, if taxis were such a hassle, why women don’t just walk home, and Williams outlined additional steps they must take to avoid victimization in that scenario.

“Ladies, if you’re going to walk home, make sure you button an overcoat to hide those gams,” she said. “You can just throw a blanket over your drunk friend. Ditch the heels and change into some shoes you can run in. Adopt a masculine gait. If you have a hoodie, keep it up, and no earbuds, OK?”

Williams then reminded women to save any sexually explicit texts, angry voicemails, or threatening Internet posts made by their “crazy ex.”

“Just save it all, OK?” she said. “The college and the cops won’t do anything, but maybe it will help you with your civil suit.”

“Let’s be real, Jessica,” he said. “You’re telling me that women just spend their whole day navigating an obstacle course of sexual menace?”

She agreed that was “pretty much” the case, and Klepper reminded her that not all men were bad.

“I’ll keep that in mind that next time a guy says he wants to lick my back while I’m walking to work at eight in the f*cking morning,” Williams said.

Watch the entire episode posted online by "The Daily Show":