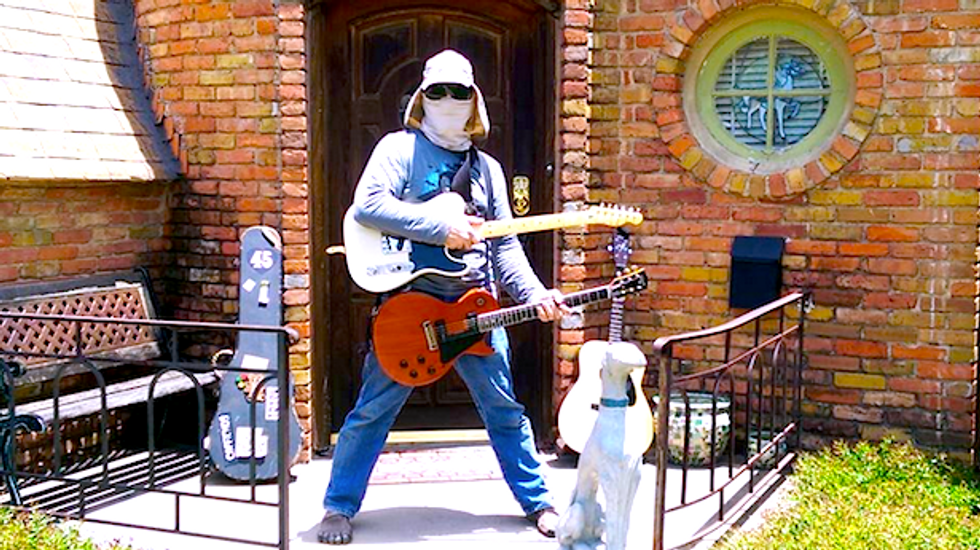 Music lovers plan to exercise their right to openly carry guitars at a July 4 rally in Texas.

“This is my sense of humor,” said event organizer Barry Kooda, a musician who’s played for years around Austin. “I have a larger following than I’d like because I’m just the local yokel.”

Kooda suggested the rally on Facebook as a light-hearted response to gun-rights activists openly carrying firearms around Texas and elsewhere, photographing themselves inside national retail and restaurant chains to suggest corporate endorsement.

“I’m not anti-gun at all,” the musician told KTVT-TV. “I’m a fifth-generation Texas veteran. I have guns, (but) leave them at home. You have rights -- you just don’t have to express them all the time in people’s faces.”

Kooda’s fans, friends, and followers shared his idea on social media, and supporters have offered to sell T-shirts and other items to promote the July 4 Open Carry Guitar Rally.

“You should be able to carry your guitar in public without the fear of retribution,” Kooda said. “That’s what we’re here for – America -- and Les Paul (is) made in America.”

The loosely organized event will, of course, feature live music, and organizers said its location at the Continental Avenue Bridge Park would be close to restaurants and bars if participants get hungry or thirsty.

One participant hopes to make a video of guitar enthusiasts playing the “Star-Spangled Banner” in the key of E – as Jimi Hendrix played in his famous performance of the national anthem at Woodstock -- on small, battery-powered amplifiers.

Other nods toward the 1960s counterculture were suggested.

“Do we want any nice hippy chicks to walk around with flowers to potentially put in the barrels of OCT guys? Or is that asking for a confrontation?” said Kyle Reynolds, of Dallas, who’s helping to organize the event.

Kooda said more than 800 people have already said they would attend, and he said similar rallies were planned in California, Oregon, and Virginia.

“They can bear their guitars and I’ll bear my guns -- it’s all good,” said Kory Watkins, of Open Carry Tarrant County, standing outside a strip mall with a rifle slung over his shoulder. “It’s freedom of speech, doing what’s within their rights -- and I support that.”

A guitar rally participant said he plans to take part to highlight safety concerns over the promiscuous display of firearms in public.

“Whether a gun rights advocate or a gun control advocate, or even if you don't really care about it either way, most agree that this is not the way to behave,” said participant Bobby Beeman, of Dallas.

“The groups doing this sort of thing usually seem to have between 2 and 20 people walking around with guns, getting lots of press and causing lots of concern for people just trying to go about their lives,” he continued. “When I saw this, I thought it was a great and very funny way to make a statement about this area having a few bad eggs and a lot of great people. And a time when musicians of all genre can get together and celebrate music and a passion we all share.”