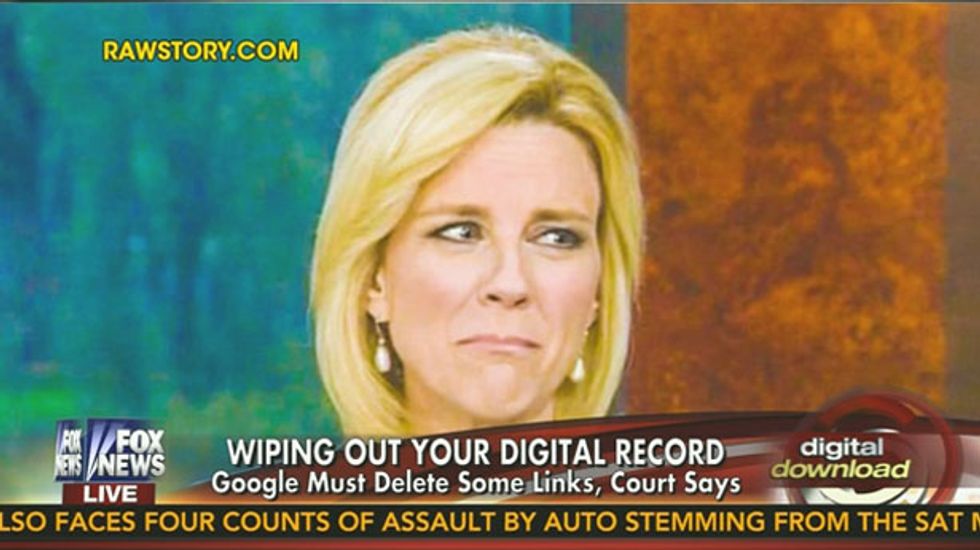 Way back in the early days of television -- 2013 to be exact -- Howard Kurtz sashayed out of CNN's studios for Fox News where "close enough  is good enough" passes as the mission statement for the Fox News fact-checkers.  On Fox's Media Buzz, he is free to cast his critical eye on all media institutions, particularly those ones who don't  provide him with a steady paycheck.

The move came in the shadow of his being shit-canned at The Daily Beast over his reporting on a Sports Illustrated article about NBA player Jason Collins coming out of the closet. In print, and elsewhere, Kurtz giggled and gawked that nowhere in the article was it mentioned that Collins had once been engaged to a (gasp!) woman, even though it was actually mentioned in paragraph eight of the story. Whoopsie-boop! Realizing that Kurtz's close-reading journalistic skills went no further than reading the caption under a corgi picture (2Cute!!! luv!!) the Beast sent him packing  causing CNN to give him both the side-eye and the cold shoulder. Next thing you know,  Howie did the ole you 'can't fire me, I quit' and bailed on his own terms.

Resurfacing at Fox, Kurtz brought with him Lauren Ashburn with whom he maintained a relationship at The Daily Download; an unwatched internet operation thingamabob with all the stability and gravitas of a bank operating out of an RV in a Waffle House parking lot. Kurtz did a lot of tap-dancing about his connection to Ashburn, most of it being bullshit that was later discovered to be... extreme bullshit,  but he is nothing but loyal to friends who helped him grift a few dollars on the side.

Ashburn, who is kind of a D-list Mika to his Morning Howie, generally provides the type of anodyne commentary that can usually be heard from a hostess of Good Morning, Albuquerque!, and she seems to be on hand solely to laugh at Howie's jokes and twinkle for the camera. And collect a paycheck. She's not insultingly stupid enough to supplant Elizabeth Hasselbeck on Fox &  Friends,  and not young and feral and just-graduated-from-Stripper-Academy enough to snarl for the camera  on Fox's afternoon shows.

She is Howie's Gal Friday on Sunday.

Occasionally though, Ashburn says something that makes people sit up and take notice, and not in the "hey, Lauren Ashburn makes sense" kind of way.

Recently Ashburn offered up the opinion that Hillary Clinton manipulated her daughter Chelsea into getting pregnant just in time for the 2016 election because Hillary needs the help since she is a dried-up withered crone of a former human.

Here at the Raw Story we felt obliged to pass on that factoid because we're all about  the chatter that is "out there," no matter how doltish. It would seem that Ashburn took offense, particularly with our screencap of her.

This past Sunday morning, Howie and Lauren took up a recent ruling from the EU's top court saying search engines must delete some personal information on request if a person's rights are harmed and there is no compelling reason for the info to be on the internet.

Introducing the segment (seen below), Howie and Ashburn observed the cardinal rule of journalism and did not bury the lede, getting right to the meat of the matter: Ashburn's displeasure with a certain website and a certain picture that she wishes would be memory-holed to internet oblivion and then killed with fire with its ashes scattered across the far reaches of the universe.

As both Kurtz and Ashburn acknowledge in the segment, the internet is a place of infinite nooks and crannies where things can be stashed, so this disappearing act is not likely to happen, much to the dismay of Ashburn, to say nothing of  George Tierney of Greenville , South Carolina.

But you have to admire her plucky resolve and that she and Howie took valuable time out of the segment to issue a passive-aggressive plea for us to decapitate the screencap.

As they say: possible, but doubtful.

Cue up  another sad face...

Watch the video from Fox News below: