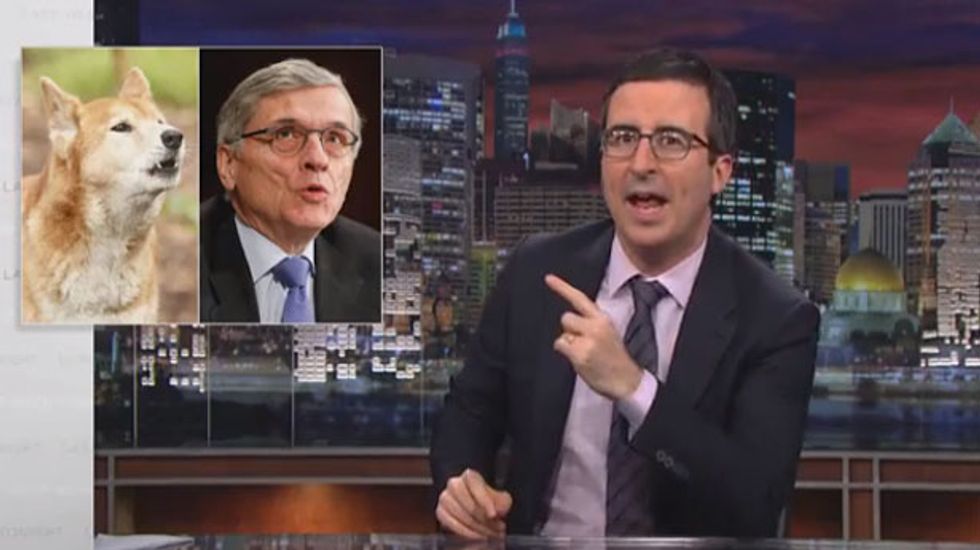 ON HBO's Last Week Tonight, host John Oliver stepped up his battle with the Federal Communications Commission over net neutrality, challenging FCC head Tom Wheeler to prove that he is not a dingo.

Previously, Oliver pointed out that cable companies were attempting to gain advantage over consumers through "Internet f*ckery" by pressing the FCC to abandon net neutrality, which treats the delivery of all data on the Internet equally. Content providers would prefer the option that allows them to charge companies varying rates based upon speed of delivery, which opponents say will degrade service and stifle competition from smaller companies.

In the previous segment, Oliver pointed out that the new head of the FCC is Tom Wheeler, a former lobbyist for the cable industry. Oliver equated the situation with needing a babysitter and hiring a dingo; described by Oliver as "Australia's favorite baby-eating animal."

In a clip shown on the show, Wheeler was asked during an open hearing if he was aware of Oliver's take on net neutrality. Wheeler stated that it showed a "high level of interest in the topic,"  before adding, "I would like to state for the record that I am not a dingo."

"First, first...wow," Oliver said. "We never said you were a dingo. We said you were like a dingo. But now you're denying it so strenuously that I'm beginning to wonder if you are a dingo after all."

Pointing out that Wheeler said he had to look up what a dingo was, Oliver stated, "That's exactly the kind of thing a dingo would say if he didn't want anyone to know he was a dingo."

"But now I have lots more questions,Wheeler, such as: 'Have you, at any time, consumed a swamp wallaby for its nutrients?'," Oliver continued. "You probably have, you f*cking dingo."

Saying "the burden of proof is on you," Oliver challenged Wheeler to prove he is not a dingo.

"Unless you can produce an official document, verified by a licensed zoologist, certifying that you are, in fact, not a one hundred-percent talking dingo, I don't think you can complain if Americans refuses to leave you alone in rooms with their babies."