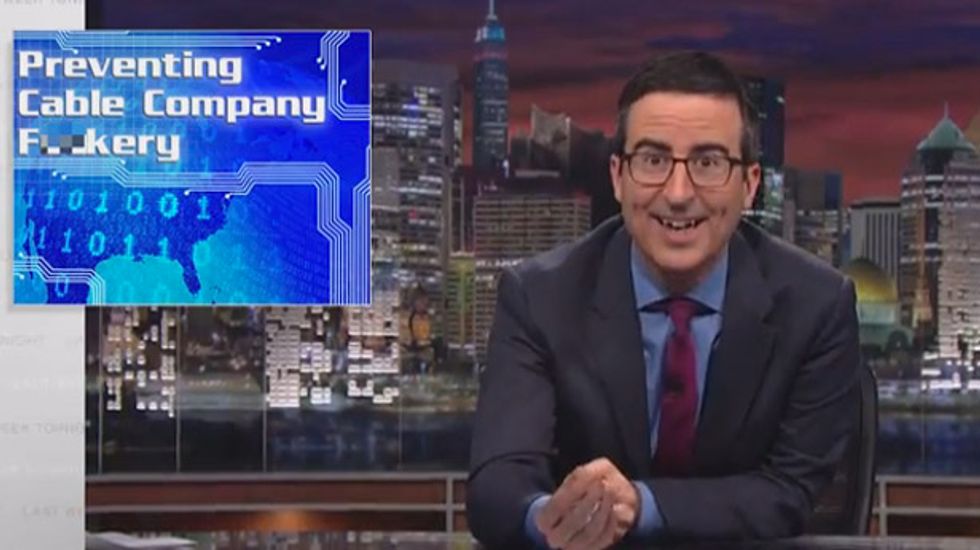 Saying net neutrality is, "the only two words in the english language promising more boredom than 'featuring Sting'," Oliver explained the importance of the pending proposal before the FCC, calling it 'hugely important."

"Essentially it means that all data has to be treated equally, no matter who created it. It's why the Internet is a weirdly level playing field," he explained. "Start-ups can supplant established brands. That's how Facebook supplanted MySpace, which supplanted Friendster, which supplanted actually having any friends. Do you remember physically having friends? It was awful. You couldn't tap people's faces to make them go away."

Turning to the FCC, Oliver said "The Internet is currently not broken, and the FCC is taking steps to fix that" before pointing out that consumer advocates were joining forces with large companies like like Netflix, Google, Amazon, and Facebook to oppose any changes.

"What's being proposed is so egregious, activists and corporations have been forced onto the same side. That's basically Lex Luthor knocking on Superman's apartment door and going, 'listen, I know we have our differences, but we have got to get rid of that asshole in apart 3B.  He's too loud, Supe, he's too loud'."

Pointing out that only cable companies are in favor of tossing out net neutrality, Oliver demonstrated how the deck became further  stacked against consumers when President Obama appointed former cable company top lobbyist Tom Wheeler to head the FCC.

"Yes. The guy who used to run the cable industry's lobbying arm is now running the agency tasked with regulating it. That is the equivalent of needing a babysitter  and hiring a dingo.'

After noting that the FCC will be taking public comments on proposed changes to net neutrality, Oliver lobbied Internet commenters, whom he referred to as "monsters."

"Good evening, monsters. This may be the moment you spent your whole life training for. You've been out there ferociously commenting on dance videos of adorable 3-year-olds, saying things like 'Every child could dance like this little loser after 1 week of practice.'"

Oliver then exhorted Internet commenters like 'ronpaulfan2016,' 'onedirection4ever,' and 'onedirectionsucksballs' to contact the FCC and save net neutrality.

"We need you to get out there and, for once in your life, focus your indiscriminate rage in a useful direction. Turn on caps lock and fly, my pretties!"