Jon Stewart: 'Words have no meaning' as CNN and Fox both land 'exclusive' Hillary interviews 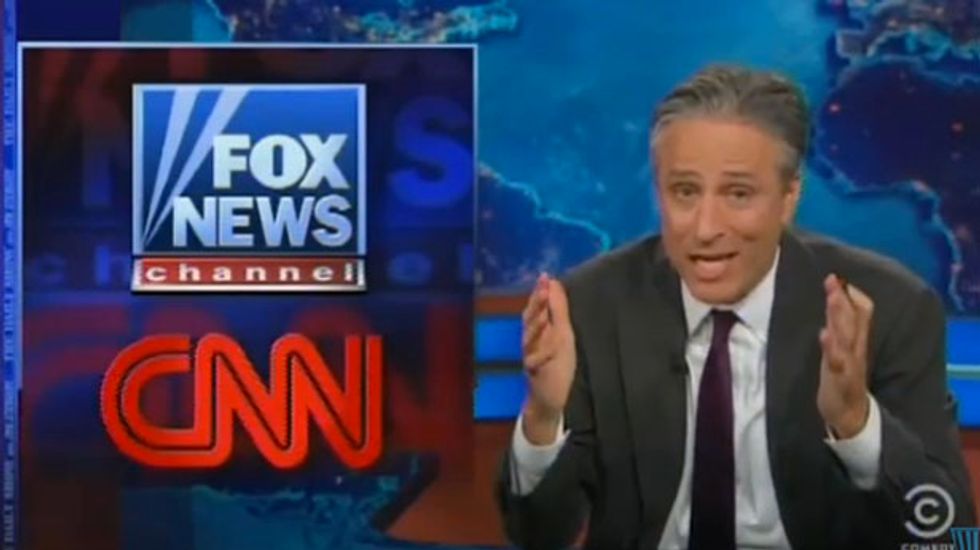 Following a brief bit on Fox News' dissatisfaction with the capture of Benghazi terrorist Ahmed Abu Khatallah, Jon Stewart turned his focus on CNN and Fox News for their breathless promotion of an "exclusive" interview with Hillary Clinton within an hour of each other on Tuesday night.

Saying Fox had "planned their entire day" around the former Secretary of State, the Daily Show rolled Fox clips promoting her appearance, calling it a "Fox News exclusive," with Stewart adding that "you will not see Hillary Clinton anywhere else," before rolling clips from CNN promoting an exclusive CNN Town Hall with Clinton the same evening.

"Wow. Imagine that." Stewart said. "Two news networks expressly promoting exclusives with Hillary Clinton -- on the same day. It's like words have no meaning anymore."

Stewart still mockingly lauded both networks for scoring an interview with the "Salinger-like recluse Hillary Clinton. A woman whose secretive nationwide book tour had restricted her access to NBC, CBS, ABC twice, and the Arlington, Virginia, Costco."

CNN drew special attention for promoting the interview with a "behind the scenes look" at the chairs Hillary Clinton and interviewer Christiane Amanpour would be sitting in ("Honey get in here, Honey. Honey, they're introducing the chairs!") before a Daily Show montage of Clinton and Amanpour repeatedly mentioning the title of Clinton's book, Hard Choices, causing Stewart to remark that it was a good thing the book was not called "Ultimate F#@kstorm."

CNN then followed up the town hall interview with a town hall recap, led by Wolf Blitzer who encouraged the audience to applaud the work done by Amanpour and Jake Tapper, while effusively telling them what a great job they did, causing Stewart to laugh and remark, "I swear to God, you know what CNN? From now on, I'm just going to call your network Ron Jeremy, because you're the only news network that can blow itself."