Maddow: Today was a bad day for governors who want to be president someday 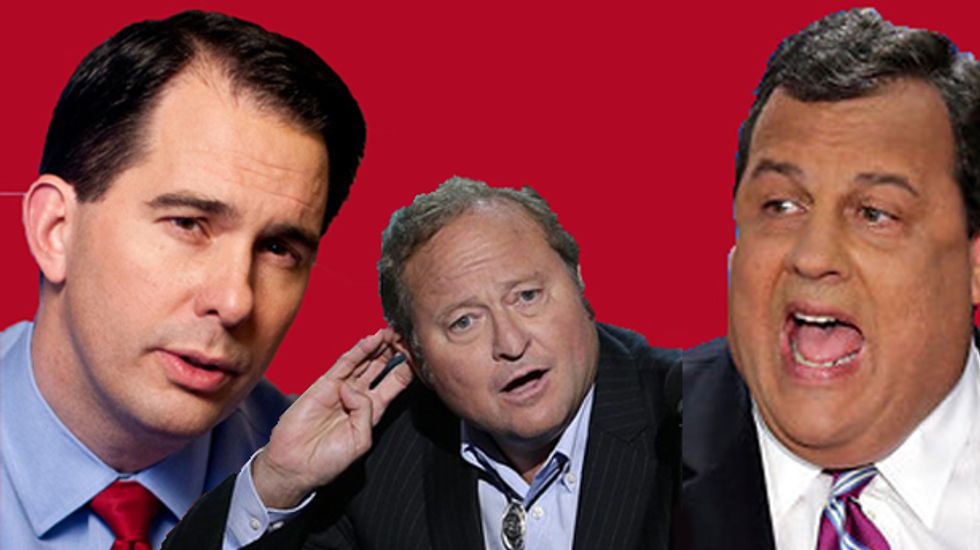 Rachel Maddow crossed the aisle Thursday night, pointing out that today was not a very good day for three governors -- two Republicans, one a Democrat -- who have their eyes on the White House prize in the very near future.

Governors Scott Walker of Wisconsin, Chris Christie of New Jersey, and former Montana Gov. Brian Schweitzer all began the day with bad news and, as Maddow explained, "They kind of made the bad news themselves."

Starting with Gov. Walker, who must first get re-elected in his state before making a run for the presidency, Maddow pointed ou that his day started off poorly when newly released data showed the state of Wisconsin 37th in job creation.

"Scott Walker, of course, ran as the guy who was going to create jobs in Wisconsin," she explained. "When you make something the central point of why you're running for office, being bad at that specific thing ends up being a really big political liability."

Walker's day grew worse when previously sealed documents revealed he is at the center of what prosecutors are calling a "sweeping criminal scheme."

Maddow added that this is part of an investigation into political shenanigans that has been going on for sometime, but now the public knows about it.

"There it is all over the news today, all over Wisconsin, all over the country, in black and white: 'Prosecutors say Gov. Scott Walker part of criminal scheme.'"

Today Esquire revealed that sources say four staffers and appointees of Christie are likely looking at indictments being handed down.

"After what the Wall Street Journal said last week, and what Esquire magazine said today," Maddow said. "Well, that made for bad day in the news for governor  who wants to be president number two."

Maddow then turned to Schweitzer who did the damage to himself in an interview with the National Journal titled, 'The Gonzo Option.'

Maddow pointed out that Schweitzer compared Sen. Dianne Feinstein to a streetwalker,  said his 'gaydar' told him Coingressman Eric Cantor was gay, and added that southern men sound 'effeminate.'

"Governor Brian Schweitzer, again, has apologized for these remarks. He called them 'stupid and insensitive.' He said he is deeply sorry he said these these things, but you know, even just the Dianne Feinstein  comments alone,... is there really a deeply sorry, deep enough?"

Watch the video below from The Rachel Maddow Show: