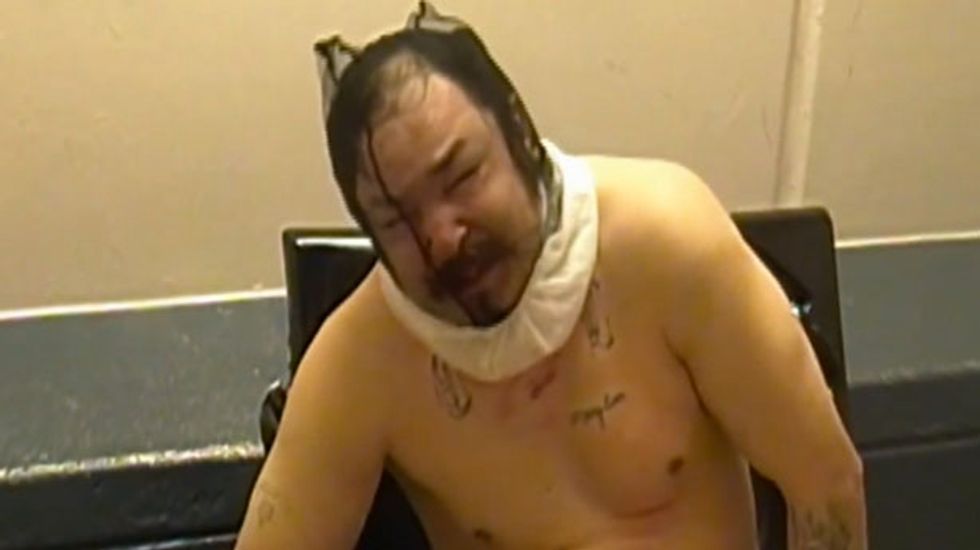 The family of a mentally ill Colorado prison inmate who died while in custody has filed a lawsuit alleging guards stood around joking while failing to attend to his medical needs following a seizure caught on tape.

According to the lawsuit, at least 16 state prison staff members did nothing to help  Christopher Lopez, 35, as he suffered seizures and died after being restrained in a chair, as documented in the video provided to 9News.

According to his family, Lopez, who had just been released from nine-and-a-half months in solitary confinement, suffered from bipolar schizoaffective disorder.

Two days after being released from solitary, he was discovered by jailers lying on the floor in his cell barely conscious. Instead of calling for medical assistance, the guards allegedly put Lopez in chains and placed a 'spit hood' over his head before strapping him into a chair.

While restrained by the chair, Lopez can be seen in the video having one or two grand mal seizures before slumping over. It is not clear if any staff saw the seizures as the video camera filming him appeared to be unmanned.

Prison staff eventually took Lopez out of the chair and placed him on his side on the ground, with one officer saying, ""Holler if anything changes," and another replying, "Like, if he stops breathing?"

Hours later an on-call mental-health clinician speaks to Lopez through the food slot in his door, "What are you doing? Why are you doing this?"

She then adds "I can see you breathing."

"Is he still on the floor?" asks one guard to which another replies, "Uh huh."

Another guard can be heard to say "He likes it on the floor."

The officers then stood by talking about Disneyland and Walmart before deciding to take Lopez out of his restraints.

At 9:24 a.m., approximately 18 minutes after the video showed Lopez taking his last meaningful breath, an officer says, "We need to check this guy's pulse."

A coroner report states that Lopez died of natural causes, likely the result of a sodium deficiency which the family believes may have been brought on by the psychotropic medications Lopez had been receiving.

The lawsuit, filed by the family states, "'We have a ringside seat to watch Mr. Lopez suffer two grand mal seizures in front of the camera while the Defendants idly stand about and discuss their views about Wal-Mart and other equally important topics, laughing and joking with one another, all the while completely ignoring the dying man in their charge."

According to Adrienne Jacobson, a spokesperson for the Department of Corrections, three staff members were fired and five more were reprimanded for their actions that day.

In 2007, Lopez was sentenced to a two-year prison sentence for trespassing, however while in prison he assaulted a corrections officer and an additional four years were tacked on to his sentence.

"There has to be more than hand wringing and finger wagging when something like this happens," he said. "His death was eminently preventable. All they had to do was get medical help for him, and they couldn't be bothered."

Lane added, "The Department of Corrections treated Christopher Lopez in a way that an animal should not be treated."

Watch the video below from 9News: