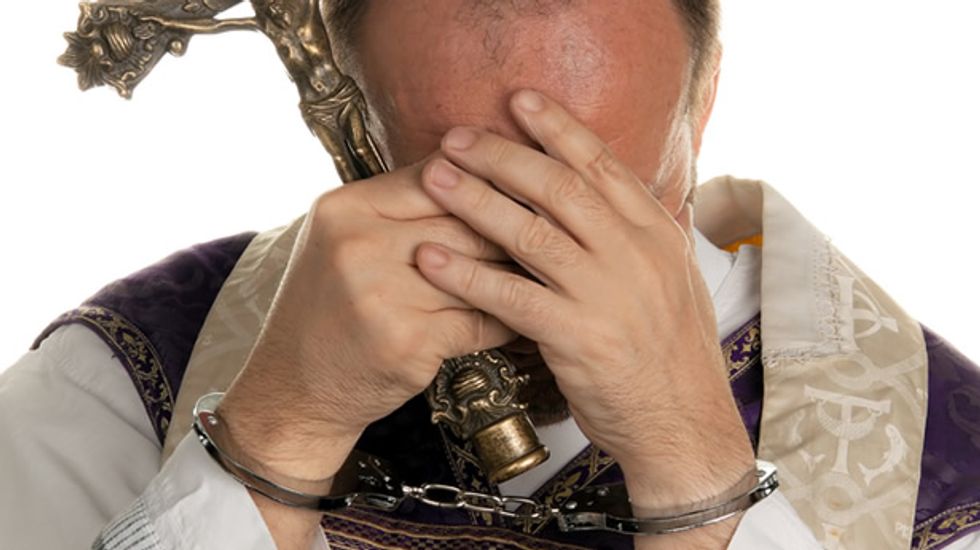 Lawyers claim the Diocese of Trenton, New Jersey, should not be held liable for sexual abuse allegedly committed by a priest because he wasn’t officially “on duty” when he molested a teenage boy.

Chris Naples claimed Rev. Terence McAlinden, who once headed the diocese’s youth group, sexually abused him during church-sponsored trips to Delaware in the 1980s.

But diocese lawyers told the Delaware Supreme Court that McAlinden was not officially on duty when the abuse took place.

“You can determine a priest is not on duty when he is molesting a child, for example,” the attorney argued. “A priest abusing a child is absolutely contrary to the pursuit of his master’s business, to the work of a diocese.”

That statement left Naples reeling, he told The (Newark) Star-Ledger.

"Any hope I had that the church was concerned about me as a victim or about the conduct of its priests was totally gone," Naples said. "They were washing their hands of it. I was shattered. I just couldn’t believe that was one of their arguments."

Delaware courts ruled Naples did not have jurisdiction to sue the diocese in that state because he couldn’t prove the trips were church sanctioned, but he did win a $3 million judgment in that state against McAlinden.

The 42-year-old Naples has filed another suit against the diocese in Mercer County, New Jersey, although he expects he’ll never see a penny from McAlinden, who has few assets.

"This has never been about the money," Naples said. "It’s about exposing him for the monster that he is, and it’s about transparency in the diocese. They knew about McAlinden. They could have done something about it. And they did what every other diocese did. They kept it hush-hush and paid behind-the-scenes settlements."

He had previously served for two decades as director of the Catholic Youth Organization.

Naples, who is married with two children, first told the diocese in 2007 that he was abused by the priest for more than a decade, starting when he was 13 years old.

The diocese found the claims to be credible and suspended McAlinden from ministry, effectively ending his career as a priest.

Two other men came forward with similar claims, and one of them said he had reached a settlement with the diocese in 1992, three years after first coming forward.

The other accuser, who claimed McAlinden abused him in the 1960s, reached a settlement two years ago with the diocese.

Naples said the priest began abusing him on July 4, 1986, on a boat McAlinden owned.

He claims McAlinden sexually assaulted him hundreds of times afterward at various locations, including the St. Theresa’s rectory and on trips out of town.

Naples claims a church housekeeper walked into a bedroom during one of the assaults, and his lawsuit claims other priests knew about McAlinden’s overnight outings with boys.

The priest, who is now 73 years old, admitted in a 2012 deposition that he had an intense sexual relationship with Naples, but he claimed it began after the younger man turned 18.

He also admitted to sleeping nude with other teenage boys active in the youth group or bathing nude with them in a hot tub at his parents’ home.

Naples said the abuse continued until he was in his mid-20s, but he didn’t report it until later because the priest had emotional control over him.

"He knew how to manipulate," Naples said. "He would say things like, ‘If your mother found out about this special thing we have, she would die.' He called it our little secret. And I thought I was the only one."

The priest introduced Naples to his wife, and the priest presided over their wedding, baptized their children, and was named godfather to one child.

He finally told his wife about the abuse in 2007, about a decade after it ended, when she confronted him and asked if he was having an affair.

Naples reported the abuse about a month later to the Ocean County prosecutor’s office, but authorities told him the claims were beyond the statute of limitations.

[Image: priest in handcuffs via Shutterstock]