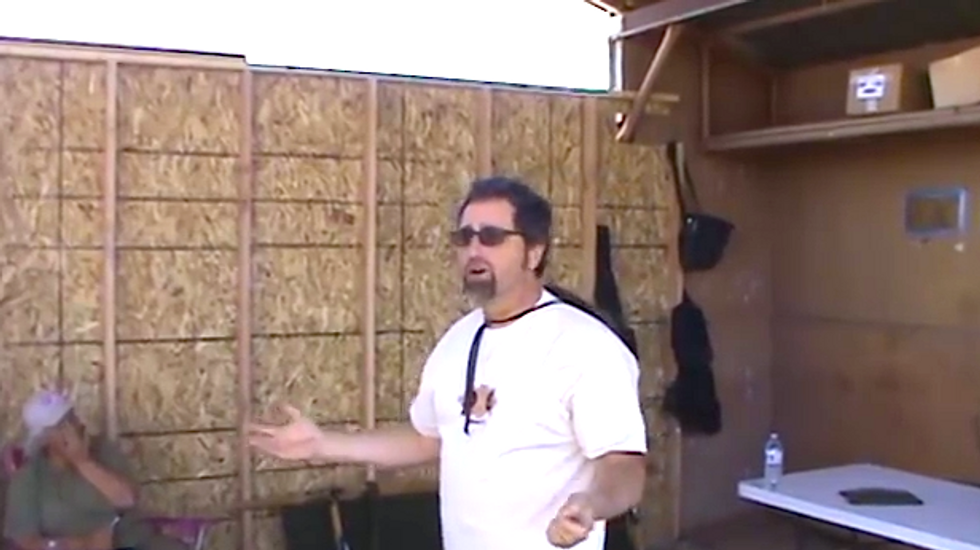 The continuing standoff at the Bundy ranch has exposed the militia members, gun enthusiasts, survivalists, and sovereign citizens drawn there to one another’s ideas in kind of an extremist incubator.

Videos posted online show the scofflaw rancher’s supporters explaining their ideologies in lengthy lectures, such as one posted earlier this month that shows “private attorney general” Jeff Ball explaining that laws don’t apply to individuals if they understand how to rebut them.

“I want to give you guys the basic chain of command, all right?” said Ball, of the Citizens Action Network. “Up at the top of this tree is the creator, whoever your creator is, that’s where the creator’s at. The one below that is you, okay? So your original contract was with the creator.”

“The earth is our inheritance, OK, but what these guys are trying to do is third-party their way into it,” Ball said. “So here’s how they want you to believe the chain of command goes: God, the Vatican, Washington, D.C., the city of London.”

Ball claimed London controlled the world’s finances, while Washington created war and kept slaves in line by “taxing them to death,” and he argued that the Vatican interfered with an individual’s contract with the creator.

“You guys have a contract with the creator and this earth is your inheritance,” he said. “That’s it; there is no more. You’re not subject to anybody, as long as you don’t hurt anybody. If you create injury on somebody, then that’s a different story.”

Ball argued that the state could not be a claimant under common law, but he said government prosecutors unlawfully did so in nearly every criminal proceeding.

"There’s no claimant," he said. "The state’s not allowed to be a claimant, yet they do that every day. If you don’t rebut it, then that means you consent to it, and they move forward with it and they subjugate you to it."

Ball argued that Americans had loaned out their sovereignty to public servants, but they reserve the right to take it back.

“So when that governor, that sheriff, doesn’t do his job, we can go take them out of office," he said. "We don’t have to wait for an election.”

He didn’t explain how that worked, but in another video posted online, Ball argues that individuals can escape police questioning by insisting officers fill out a form.

As the Eagles’ 1979 Al Green pastiche, “I Can’t Tell You Why,” plays in the background, Ball explains that sovereign citizens can hold public officials accountable for violating their oath with the Public Servant Questionnaire.

Ball claims the document, which asks for identifying information and explanations of the officers’ intentions, must be filled out by public servants before they question citizens.

He argues the questionnaire is authorized by the Privacy Act of 1896.

“We gave our power to them – loaned it to them – to do their job, and most of them don’t do their job,” Ball argued. “So the next time they try to order them around, know that they’re just a corporation, they have no authority on you. You have the authority. Why? Because God and you is the original contract. Nobody can come in between that, period.”