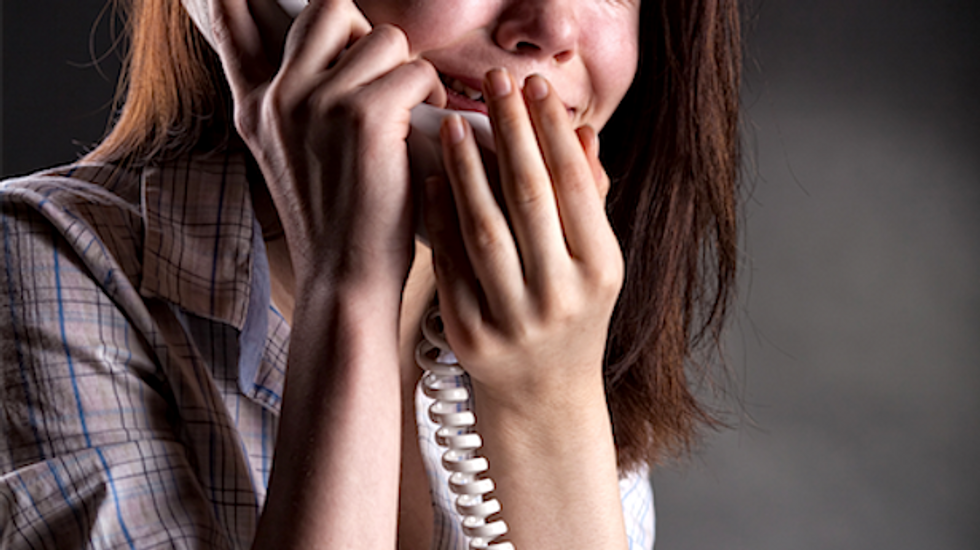 Crying woman with a phone on a dark background (Shutterstock)

A 911 dispatcher must explain her reaction to a college student who called to report that she had been raped at gunpoint by an intruder.

The victim called just after 4 a.m. Sunday to report she had been woken up by a stranger holding a gun while staying at a friend’s house near the Ohio State University campus, reported WSYX-TV.

The man held the gun to her head and forced her to perform sex acts on him, the victim said.

She told the dispatcher the man fled the house, where several sorority members were staying, after sexually assaulting her and stealing some cash and her iPhone.

The victim told the dispatcher she did not know her friend’s address, and she asked if authorities could locate her iPhone.

“No. We can’t. That’s why I need to know where you are,” the dispatcher said on a recording of the call.

The victim described her assailant as a small white man wearing a white shirt, and she asked police to immediately arrest him.

“Ma’am, you’re going to have to quit crying so I can get the information from you,” the dispatcher said.

The dispatcher then asked how the attacker got into the house, but the victim repeatedly said she had “no idea.”

“Well, they’re not going to be able to find him with the information that you’ve given,” the dispatcher said.

The victim then broke down sobbing.

“Don’t you understand how horrified I am?” she said. “I am a 20-year-old from Upper Arlington. I don’t know what you deal with every day, but the kind of sympathy you have is zero.”

A supervisor said the dispatcher would be asked to explain her reaction during the call, but she would not be reprimanded because the assailant was arrested.

Michael Callaghan, 30, was charged with rape and burglary in connection with the case.

Police said they had received only six complaints related to more than 1.5 million 911 calls made last year.

[Image: Crying woman with a phone on a dark background via Shutterstock]