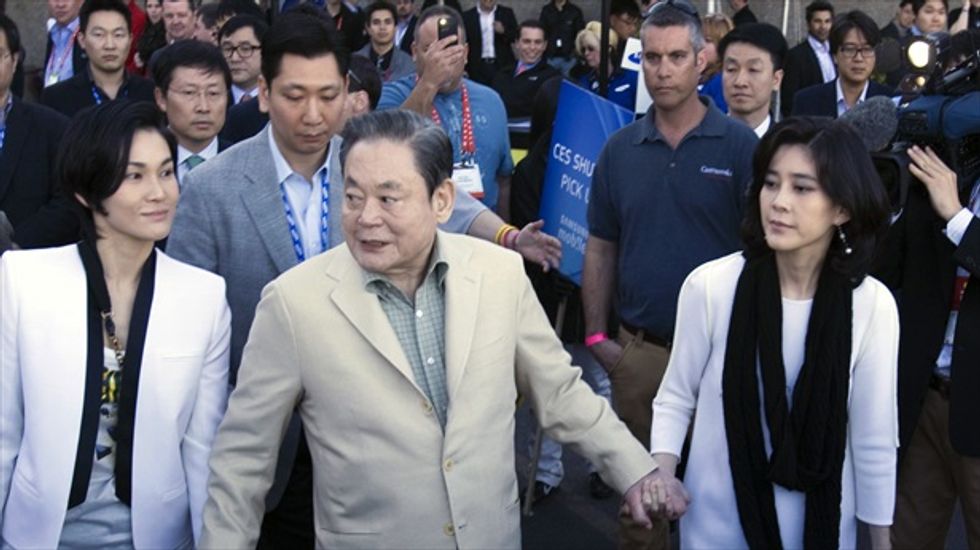 SEOUL (Reuters) - The heirs of ailing Samsung Group patriarch Lee Kun-hee face one of the biggest inheritance tax bills ever, and appear to have little option but to pay up.

By some calculations, Lee's 45-year-old son Jay Y. Lee, the group's presumed heir apparent, and his two sisters could be on the hook for about $6 billion in tax under South Korea's top level inheritance tax rate of 50 percent.

To put that in perspective, the United States expects to collect just $16 billion this year in estate and gift taxes - a levy that has long been a political bone of contention and which many rich Americans go to great lengths to minimize.

However, attempts by the Lee family to ease its tax burden could weaken its control over an empire it now runs through a complex structure of interlocking ownership - and risk stirring up public condemnation.

The elder Lee's assets, held mostly in shares of Samsung Electronics <005930.KS>, the world's dominant smartphone maker, and Samsung Life Insurance <032830.KS>, have a market value of around 13 trillion won ($12.7 billion). Depending on how the inheritance levy is applied, tax on those holdings could top 6 trillion won at current levels.

Because the shares are crucial to maintaining management control of the group's various affiliates, analysts say the family would aim to retain them even at great expense.

"The typical strategy is to adjust the amount of assets before death, take advantage of deductibles that are legally permitted or gift assets to push down the inheritance tax bill in advance. But at 6 trillion won, deductibles don't have much meaning," said Ku Sang-su, a certified public accountant at law firm Jipyong. "Once Chairman Lee passes, there aren't many options to reduce the inheritance tax."

The elder Lee, 72, was hospitalized last month following a heart attack. While his condition is said to be improving gradually, it is not clear whether he will be able to play as big a role in the conglomerate as he did in the past.

A Samsung Group spokeswoman declined to comment on succession planning.

The bill could be more than triple the 1.7 trillion won that South Korea collected in inheritance taxes in 2012. A National Tax Service official said the authority does no advance monitoring of potentially large payments.

The sprawling Samsung conglomerate, whose 2012 revenues accounted for more than a quarter of South Korea's nominal gross domestic product, appears to be accelerating a restructuring in anticipation of an eventual succession.

Samsung Everland Inc, a key holding company within the group, this week announced plans for an IPO, following a similar announcement last month by the group's IT solutions affiliate Samsung SDS. Both deals could help the Lee heirs raise cash to tighten their grip on group companies, and help pay the looming inheritance tax bill.

Both Hong Kong and Singapore, with sizeable billionaire populations, have done away with estate taxes in the last decade, although Japan, like South Korea, imposes an estate tax of up to 50 percent. In the United States, the top federal estate tax rate is 40 percent.

In South Korea, the tax has long been a headache for the seriously wealthy, such as the heads of the conglomerates known as chaebol that dominate the economy. Hyundai Motor Group and Doosan Group may also face costly successions.

Michael Shikuma, a Tokyo-based international tax and estate planner at U.S. law firm Morrison & Foerster, said there tends to be less use of estate planning in Asia. "In Japan, historically, tax planning has not really been considered something that's a patriotic thing to do," he said.

The Lees have long prepared for succession in anticipation of the eventual transfer of control to the younger generation.

However, a series of maneuvers that was widely criticized by civic groups and politicians means the group would be less likely to attempt any tax measures that might stir a public outcry, some analysts and tax experts said.

The elder Lee's three children acquired big stakes in Samsung Everland and Samsung SDS at prices far below market value during the 1990s in deals that were detailed during 2008-09 trials at which Lee Kun-hee was charged with breach of trust and tax evasion. He was found guilty of breach of trust regarding Samsung SDS, and tax evasion, and given a suspended 3-year jail sentence, but later received a presidential pardon.

The younger Lees' shares in Everland and SDS will likely be worth billions of dollars after the companies go public.

Lee Kun-hee's daughters, Boo-jin and Seo-hyun, both in their early 40s, are expected eventually to control the group's hotels and fashion businesses, respectively.

"Any tricks to try to skimp on the inheritance tax in the current public climate will lead to a huge backlash," said Chung Sun-sup, chief executive of research firm Chaebul.com. "The information is public and there is a consensus on how much the family should pay. If they try to pay 20-30 percent instead of half, would the public accept that?"

Despite past measures to shift assets to the younger generation, the huge increase in market value of the elder Lee's holdings makes it virtually impossible for his heirs to do much to lessen the tax bill in advance.

But there are steps they can take to manage the payment.

The listings of Samsung Everland and SDS will provide them with resources to raise cash, either by selling shares or borrowing against them. They could also use shares they inherit from their father as collateral to meet their obligations.

The family could also create charities and transfer portions of the elder Lee's stakes to reduce the tax bill. However, rules limit how much of a company can be given to charities, and tax experts said it was unlikely the younger Lees would try to control the group's various arms through a chain of foundations.

"I don't think the Korean people will accept the scenario in which the decision-making process for a publicly traded company is decided by a group of foundations controlled by the Lee family," said a tax expert at a major local accounting firm, who declined to be identified due to the sensitivity of the issue.

Tax experts said they expect the family to use a combination of methods to meet their tax burden in a way that the public perceives as legitimate.

"Without inheriting Chairman Lee Kun-hee's shares, the Lees will not be able to retain both ownership and control two generations from now," brokerage E*Trade Korea said in a report. "The problem is taxes."