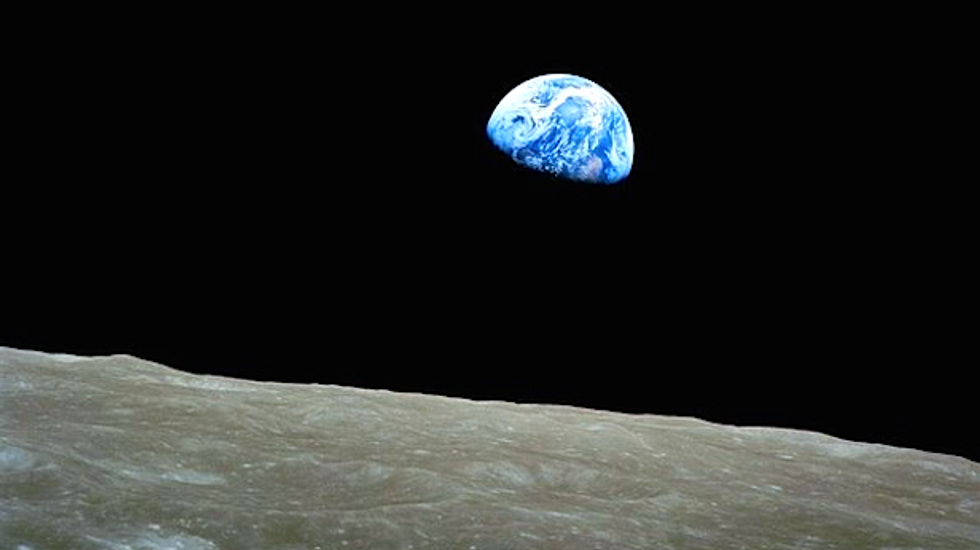 Nobu Okada wants to save the planet from orbiting junk, which he says is in danger of cutting us off from the satellites we depend on and the outer space beyond. But to help fund that he needs to land a can of powdered Japanese soft drink on the Moon.

"Debris affects our daily lives. What if you can't be prepared for storms, not watch the World Cup, if ships can't use GPS?" he told a conference recently. "Our daily lives are totally dependent on satellite technology."

Okada, 41, says his Singapore-based start-up Astroscale is just part of a dramatic shift in the "NewSpace" industry -- the growth of private companies and new technologies challenging old, expensive government-driven programs. While small start-ups to giants like Google send ever more objects into space, Okada is tackling what Lux Research analyst Mark Bunger calls THE problem of NewSpace: clearing up what's already there.

U.S. space agency NASA estimates that more than half a million bits of debris -- from defunct satellites to marble-sized fragments like lens covers and copper wire -- are orbiting Earth. Millions more are too small to track. And because they're hurtling around at thousands of kilometers per hour, even small flecks of paint can be lethal when they collide -- hitting the space shuttle, for example, smashing through a glass visor or tearing solar panels off satellites.

So far, this orbital mayhem has been largely the concern of governments and their space agencies. Okada says that's no longer enough. "Somehow the amount of debris is still growing and there's no clear solution yet," he says.

Space junk hasn't just seeped into the popular consciousness because of the movie "Gravity." Experts agree we've now hit the so-called Kessler Effect -- when the number of objects in lower Earth orbit is dense enough that collisions could cause a cascade. Some experts, though not all, agree with Okada's nightmare vision where it becomes harder to guarantee the safety of astronauts passing through these debris fields on the way to outer space.

"Suddenly you have a debris field acting as a real barrier to operations in the lower Earth orbit," says Jeff Forrest, Metropolitan State University of Denver chair of Aviation and Aerospace Science, "which would annihilate commerce in inner space, and make launching out of Earth's environment extremely risky."

Space junk will orbit for anything between a few years to a century or more before gradually falling to the atmosphere and burning up. There have been more than a dozen proposals, most either made or funded by major space agencies, to speed up the process or destroy the debris remotely. They range from a giant tether that would generate electricity to slow down space junk until it falls into lower orbits to deploying tungsten dust that could, the theory goes, sweep smaller debris into the lower atmosphere. Australian researchers have proposed zapping debris with lasers. Others involve balloons, a solar sail, a wall of frozen water and harpoons.

None has yet been fully implemented, mostly because of cost.

Astroscale is developing a technology that Okada says is cheaper and better than these approaches. A mother ship launches six smaller 'boys' which latch on to the 200 largest pieces of space junk and propel them into a lower orbit. They could also prolong a satellite's life through remote maintenance.

But there are problems. Holger Krag of the European Space Agency (ESA) points to the lack of legal framework for private firms to start removing debris. Under informal agreements, countries active in space have only implemented 60 percent of their stated commitments to remove their debris, says Krag.

And then there's money. While the technological issues are not insurmountable, "the harder challenge is to make them economically feasible," says Sima Adhya, head of space at global speciality insurer Torus. "I've yet to see a convincing business plan where a company could make money out of a service removing debris, or for a government to justify the expense."

That's why eyebrows have been raised that a humble start-up, which has so far secured no firm financing or investors and is led by someone with no track record in space, could get into removing space debris. Okada, though, counters that his youthful passion for space and entrepreneurial bent -- he had stints at Japan's finance ministry, Bain Capital and McKinsey's -- suits finding the elusive business model for 'spring cleaning' space.

The key, he says, is to develop a technology that can serve a dual purpose -- generating enough revenue until the real business of debris removal takes off. So, by persuading Japanese soft drinks manufacturer Otsuka Pharmaceutical to pay to get one of its 'Pocari Sweat' drinks on the Moon, the company gets publicity, while Astroscale gets money and a chance to test materials and build relationships with partners. Okada declined to say how much the deal with Otsuka is worth.

U.S.-based Astrobotic, for example, will deliver the titanium capsule -- which looks like a Pocari Sweat can but actually contains 120 plates laser-engraved with children's messages, and a serving of the powdered drink. (The thinking goes that by the time the next humans land on the Moon they will be able to reach the water known to be trapped under the surface to mix with the drink powder.)

There'll be more elaborate PR stunts to come, Okada says, which will help fund Astroscale's team of space pioneers until the opportunity comes to launch his mother and boys for real.

Okada sees his vision as part of a bigger shift, where the cost of technology is falling far enough to allow start-ups and others to make inroads into space. "The overall trend is that the space industry is changing," he says.

Google has bought a solar-powered drone start-up, satellite imaging company Skybox and has been reported to be in talks to buy a stake in spaceship company Virgin Galactic. Google said it doesn't comment on speculation.

And then there are microsatellites -- hundreds, possibly thousands, of which will be launched in the next few years to gather data from sensors, monitor Earth via cameras, and provide communications.

Syed Karim, for example, is launching a start-up called Outernet which he says will broadcast internet content to traditional dishes, mobile devices and simple antennae from satellites. He sees commodity hardware and off-the-shelf components upending the industry by shortening the feedback loop between design, development and lift-off. "If you have $100,000, we can get something small into orbit in six months," he says.

Indeed, some say the ease with which smaller devices can be launched spaceward may be contributing to the problem.

The ESA's Krag says that while the larger microsatellites -- so-called cubesats, which are 10 cms wide -- can be monitored, "flying circuit boards smaller than a bar of chocolate" might be too small to be tracked. Given such objects zoom around at thousands of km per hour, "we're actually placing in orbit a number of bullets, that, if we do it the wrong way, could destroy a (space) mission."

Those in the business shrug off such concerns. James Mason, former NASA research scientist and now head of missions at start-up Planet Labs, which launched 28 Earth-observing satellites earlier this year, says his company tries to launch its 'flocks' of satellites into low orbits "so that they naturally burn up in the atmosphere in a few years."

Astroscale is not entirely alone in taking on space junk.

An Italian start-up called D-Orbit is approaching it from the other side - instead of clearing up the trash, called active debris removal, it wants to ensure that whatever goes up there can either come down again and burn up, or be pushed out into so-called graveyard orbits, where it can't cause any damage. The company has developed a propulsive device that would be attached to satellites before launch -- and activated only when the satellite reaches its end-of-life.

Founder Luca Rossettini says his technology would make satellites last longer and speed up their decommissioning. D-Orbit is working with a major satellite operator to include their device on an upcoming launch, he says. When that approach is mastered, D-Orbit would then explore removing existing junk.

"Basically, our technology is ready and can 'freeze' the problem. Active debris removal would slowly decrease the amount of junk."

Okada, for his part, acknowledges he hasn't taken an easy path. He set up his company in Singapore because of fears that governments elsewhere may use his technology for military ends - capturing or diverting other countries' satellites, for example. He is also caught between the speed of the space industry - where launches can take years to prepare - and start-up investors used to much shorter time frames.

"Investors have to exit within five years. This is not one of those industries," he told Reuters.

But he thinks the industry is ready for someone like him. Throwing on his jacket to head off to the airport for another proselytizing talk -- this time in Japan -- he says the industry knows his is the first company to tackle this problem. And, he says, "that we are crazy enough."