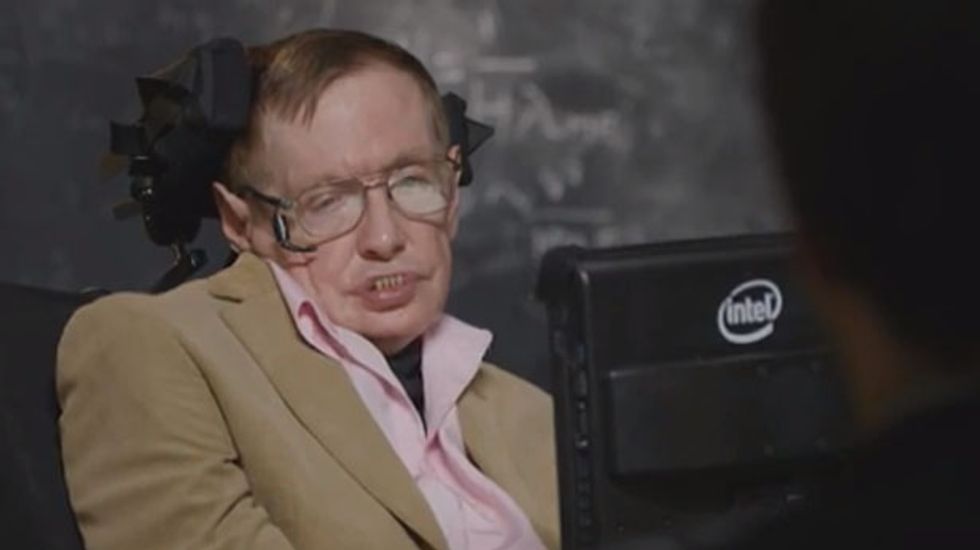 Introducing Hawking, Oliver described his "breakthrough work in black holes and string theory" as "hugely important to anyone who pretends to understand it."

"People think it's something you have in dreams, or when you're up against a deadline. But it's a well-defined concept. Imaginary time is like another direction in space," said Hawking. Hawking added that it is one thing from his work that science fiction writers haven't used, "because they don't understand it."

Turning to artificial intelligence, Oliver asked Hawking about previous comments he made claiming AI would be "the biggest event in human history. Unfortunately, it might also be the last."

"Are you saying the robots are going to destroy humanity," Oliver continued. "And is that a scientific argument or a pitch for an amazing movie?"

"Artificial intelligence could be a real danger in the not-too-distant future," Hawking replied. "It could design improvements to itself and outsmart us all."

When asked by Oliver why he shouldn't be excited about the prospect of fighting a robot, Hawking replied, "You would lose."

Questioning Hawking if he is actually talking to him or a sentient robot, Hawking tells Oliver, "You're an idiot."

Oliver then posed a series of yes and no theoretical questions to Hawking including the possibility of life on other planets ("yes"), the existence Schwartzchild wormholes ("yes"), before asking, "Me going on a date with Charlize Theron?," which Hawking dismissed out of hand as not happening in any of one of the "infinite universes."

[Image screencap from Next Week Tonight]

Rohingya refugees sued Facebook on Monday for $150 billion over claims the social network is failing to stem hate speech on its platform, exacerbating violence against the vulnerable minority.

The complaint, lodged in a California court, says the algorithms that power the US-based company promote disinformation and extremist thought that translates to real-world violence.