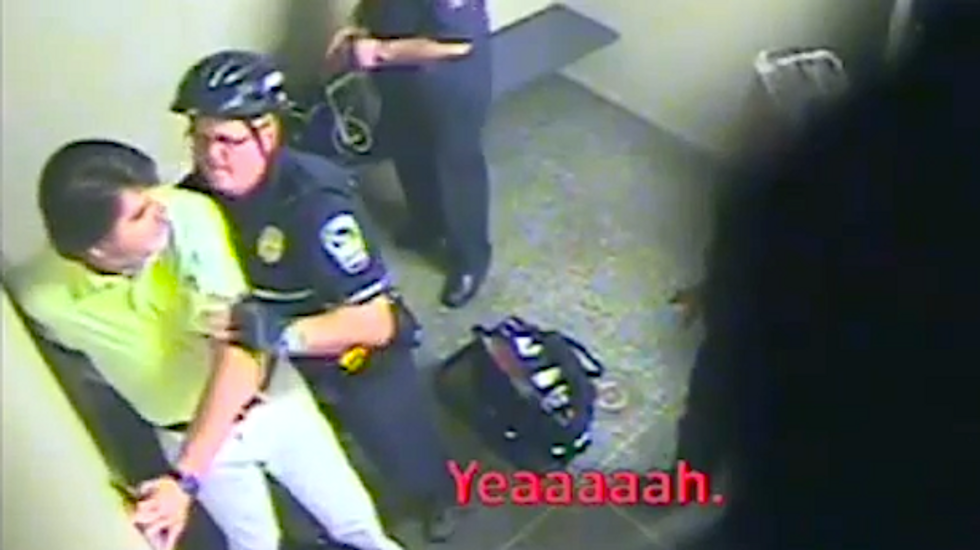 Video shot during the arrest of an intoxicated Fox News anchor contradicts police accounts of the incidents.

A police report issued after the May 21 arrest showed Gregg Jarrett, who was on leave from his weekend anchor job, was “acting very intoxicated” at the Northern Lights Grill in the main terminal of the Minneapolis-St. Paul International Airport.

The 59-year-old Jarrett, who had just been released from a drug and alcohol rehabilitation facility, was taken into police custody to sober up after bar employees said he told another customer he’d taken medication and drank vodka.

Airport police said the Fox News anchor became agitated while in the holding cell, acting as if he would leap to his feet, repeatedly yelling ‘f*ck you’ at officers, and then grabbing an officer’s arm.

But a video obtained by Gawker under the Freedom of Information Act shows Jarrett sitting calmly as two officers prepare to draw a blood sample and voluntarily taking off his jacket to give them access to his forearm.

Then Jarrett seems to become aware of what is happening and asks officers if they “really” had to make him do this.

An officer says he didn’t make Jarrett do anything, and the anchor calls him a “f*cking stupid *ss.”

Another officer enters the camera frame and stands close to Jarrett, who quickly stands up until his face is about a foot away from the officer’s.

“Oh, really, you’re going to be –“ Jarrett says, and the officer quickly grabs his right arm, twists it behind the anchor’s back, and shoves him against a wall.

When Jarrett complains, the officer grabs him by the left arm and throws him face-first onto the bench where he’d been sitting.

The officer said in his report that Jarrett grabbed his left arm, but the camera angle does not make clear whether he did or not.

“You want to act up, these go back on,” the officer says. “They can do whatever they need to do.”

Jarrett does not immediately offer his right hand to be cuffed and appears confused when the officer demands he place that hand behind his back.

Two more officers come into the holding cell to assist, while Jarrett stands with his hands placed in cuffs behind his back.

One officer tells the anchor he is going to jail, while the fourth officer shown in the video, a woman, leans down to talk quietly to Jarrett in an apparent attempt to calm him or check on his condition.

Police said a search turned up pocketed gabapentin pills, which are typically used to treat seizure disorders, restless leg syndrome, or pain related to shingles, and side effects include drowsiness, dizziness, loss of coordination, and “strange or unusual thoughts.”

Jarrett was charged with one count of obstructing the legal process and was released about early May 22 on $300 bond.