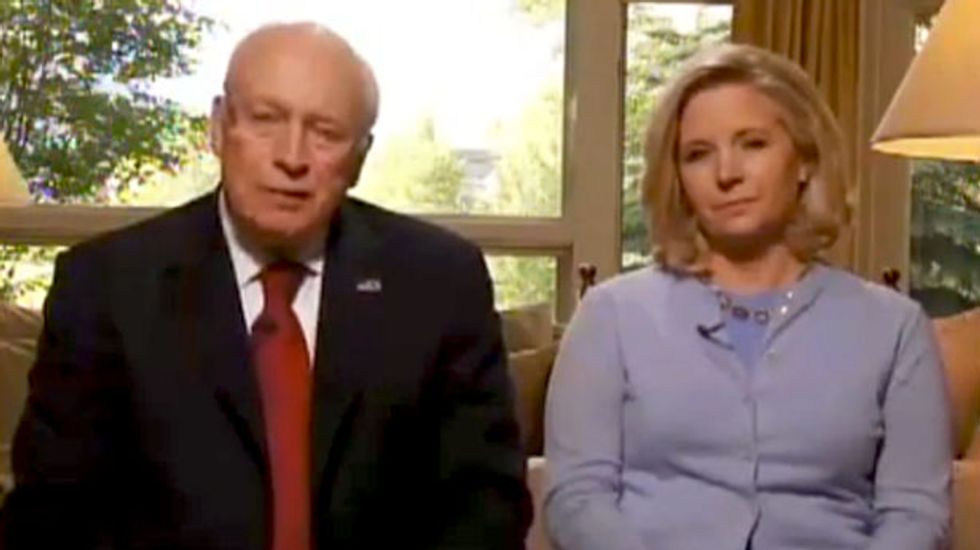 With his daughter Liz sitting dutifully beside him, former Vice President Dick Cheney spoke with Fox News personality Megyn Kelly on Tuesday night, who confronted him over his complaints about the current administration's efforts in Iraq, pointing out, “Time and time again, history has proven that you got it wrong as well in Iraq, sir.”

Referencing an editorial written by Cheney and his daughter that appeared in the Wall Street Journal, Kelly began by quoting a blog post by Paul Waldman in the Washington Post.

Waldman wrote: "There is not a single person in America — not Bill Kristol, not Paul Wolfowitz, not Don Rumsfeld, no pundit, not even President Bush himself — who has been more wrong and more shamelessly dishonest on the topic of Iraq than Dick Cheney."

Pointing out that Waldman suggests that Cheney is responsible for the mess in Iraq, Kelly invited the former VP to defend himself.

"Well, obviously, I disagree. I think we went into Iraq for very good reasons," Cheney responded. "I think when we left office we had a situation in Iraq that was very positive, we made major progress as a result of a decision President Bush made to go with a surge in '07 and '08."

Quoting from the Cheney's Wall Street Journal op-ed, Kelly read, "Rarely has a U.S. president been so wrong about so much at the expense of so many," before adding, "Time and time again, history has proven that you got it wrong as well in Iraq, sir.”

Kelly proceeded to list off a collection of quotes from Cheney claiming Saddam Hussein had WMD's, stating that America would be greeted as liberators, saying the Iraq insurgency was in the last throes. She then asked, "Now, with almost a trillion dollars spent there, with almost 4,500 American lives lost there, what do you say to those who say you were so wrong about so much at the expense of so many?'

"No, I just fundamentally disagree, Reagan -- I mean Megyn, " Cheney responded. "You have to go back and look at the track record. We inherited a situation where there was no doubt in anybody's mind about the extent of Saddam's involvement in weapons of mass destruction."

History later showed that Dick Cheney's people worked in concert with Iraq dissident Ahmed Chalabi to place false information about WMD's with the New York Times' Judith Miller whose stories were cited by Cheney as outside evidence of WMD development.

Later in the interview Kelly asked the Cheneys if they thought President Obama was "dangerous."

"Yes, I'll answer that one, Megyn. I think there is no question, I think that he is, uh, unique, in terms of a president who is sitting in the Oval Office, who has made made very clear that his desire is to weaken the nation, " she said. "And, whether you say it's his intent or naivete, you can now look at the results of the policies of the last six years."

Watch the video below from Fox News: