As Californians grapple with drought, Nestle pumps water for bottling from tribal land 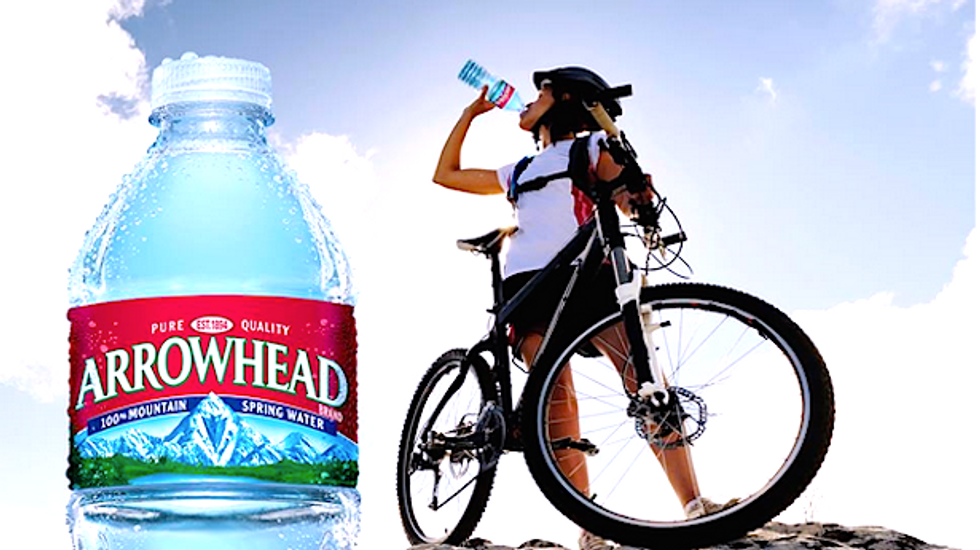 Nestle continues to draw water to sell from wells located on a California reservation despite worsening drought conditions that have prompted conservation measures limiting personal use.

The company has been drawing water for more than a decade from wells near a spring on the Morongo Band of Mission Indians' reservation, but neighbors have grown concerned about the operation as the statewide drought continues into its third year.

"Why is it possible to take water from a drought area, bottle it, and sell it?" said Linda Ivey, a Palm Desert real estate appraiser.

The Desert Sun reported that Nestle Waters North America Inc., which leases the property from the tribe, had previously submitted annual reports on its groundwater extraction to local water districts.

Those reports show the company drew between 1,366 and 595 acre-feet from two wells in Millard Canyon that it then sold under the Arrowhead and Nestle Pure Life brands.

But neither Nestle nor the Morongo tribe, which has clashed with at least one local water district over the bottling operation, have submitted an annual report on water extraction since 2009, the newspaper reported.

A rounded estimate of 750 acre-feet of water per year – or 244 million gallons – has been listed by the San Gorgonio Pass Water Agency since then.

But none of those figures have been independently verified, the paper reported, so it’s uncertain how much water the bottling plant might be drawing from other local sources.

"It's hard to know how much is being taken,” Ivey said. “We've got to protect what little water supply we have."

Nestle chairman Peter Brabeck-Letmathe drew strong criticism last year, when he suggested that access to water is not a "public right.”

“He says the water we need for drinking and basic hygiene is a human right,” Nestle said in the 2013 statement. “However, he does not believe it is fair that some people in the world still do not have access to a clean, safe supply when others can use excess amounts for non-essential purposes, without bearing a cost for its infrastructure.”

The Morongo tribe filed reports with the state that showed 598 acre-feet of groundwater were pumped in Millard Canyon and 3 acre-feet of water was diverted, which the newspaper reported translated to about 200 million gallons a year – or enough water for 400 typical households to use.

The Native American tribe is considered a sovereign nation, and so it’s exempt from oversight by local water agencies and are not subject to the same reporting requirements.

That allows the Morongo tribe to keep data on groundwater pumping and water levels confidential.

Nestle has repeatedly denied requests by The Desert Sun to tour its bottling facility, and neither the company nor the tribe responded to requests for information about how much water was bottled each year at the plaint.

Groundwater levels have been declining significantly in Riverside County since 2000 as a result of the drought.

Water researchers have been denied access to the area near the Nestle bottling plant, which covers an area larger than seven football fields and produces an estimated 1 billion bottles of Arrowhead spring water each year.

"If they weren't pumping, the volume that they're taking out would be going into either recharging groundwater or providing some surface flows,” said water researcher Peter Gleick, president of the Pacific Institute in Oakland.

Gleick was permitted to visit Millard Canyon several years ago, and he described a small stream flowing among cottonwood trees in his 2010 book, “Bottled and Sold.”

"If you had the same bottling plant in a water-rich area, then the amount of water bottled and diverted would be a small fraction of the total water available,” Gleick said. “But this is a desert ecosystem. Surface water in the desert is exceedingly rare and has a much higher environmental value than the same amount of water somewhere else."

A spokesman for the tribe defended the plant, saying it provided more than 250 local jobs bottling water for human consumption.

"The Morongo Band of Mission Indians is a sovereign nation with a long history of caring for the environment and of environmental stewardship as it relates to air quality, local habitats and tribal water resources," said tribe spokesman Michael Fisher.

The Cabazon Water District sold water rights to the tribe about 10 years ago for $3 million, which allowed the district to sharply reduce its rates to consumers.

The Morongo tribe reached a 25-year deal several months later with the Perrier Group, which is owned by Nestle, to bottle Arrowhead water there at a $26 million plant.

The company pays a fee to the tribe for every gallon drawn from the ground, although the exact terms have not been disclosed.

Nestle operates 29 bottled water facilities in the U.S. and Canada, with annual reported revenues of $4 billion in 2012.