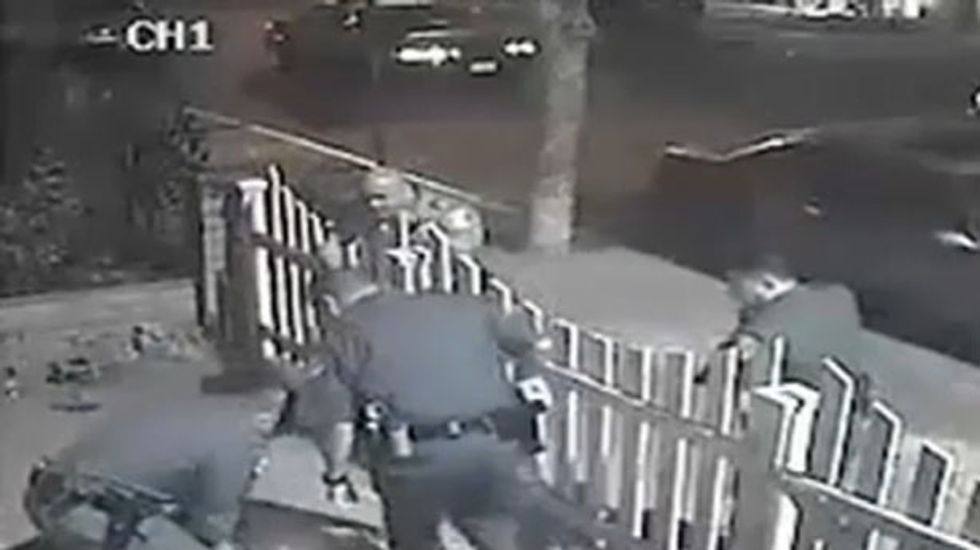 The Santa Ana Police Department is investigating the misuse of force by officers arresting a burglary suspect after receiving video that was recorded by a homeowner's surveillance camera.

Police arrested Edgar Vargas Arzate, 27, on June 20, after chasing the suspect through backyards, over fences, and on neighborhood roofs, according to the Orange County Register.

Arzate was been charged with attempted burglary, battery on a peace officer, unlawful tampering of a vehicle, and resisting a police officer following his arrest, according to court documents.

In the surveillance video, recently acquired by the police department, Arzate can be seen putting his hands up in compliance with an officer holding a flashlight on him, before laying down on the ground.

In the video footage, Arzate is mostly out of the frame making it is hard to determine whether he was resisting arrest, however he can be seen struggling as officers attempted to get him to his feet.

The incident occurred in front of the home of Miriam Grajales, whose surveillance camera captured the beating.

“He (the officer) started hitting him hard, with anger,” Grajales said. “The guy (Edgar Vargas Arzate) was yelling, ‘Help me! Help me!’”

“As per our departmental policy, those officers documented that force… in their police reports,” Bertagna said. He added that the officers contacted their supervisor, and an investigation was underway into the use of force.

Police had responded to the neighborhood after receiving a burglary call. Police then received multiple calls of a man running through backyards in the area, with one woman saying the man was first in her yard and then on her porch  trying to force open a locked window.

“He looked like he was hiding, high on drugs,” Socorro Acosta said.

Watch the video below provided by the Orange County Register: