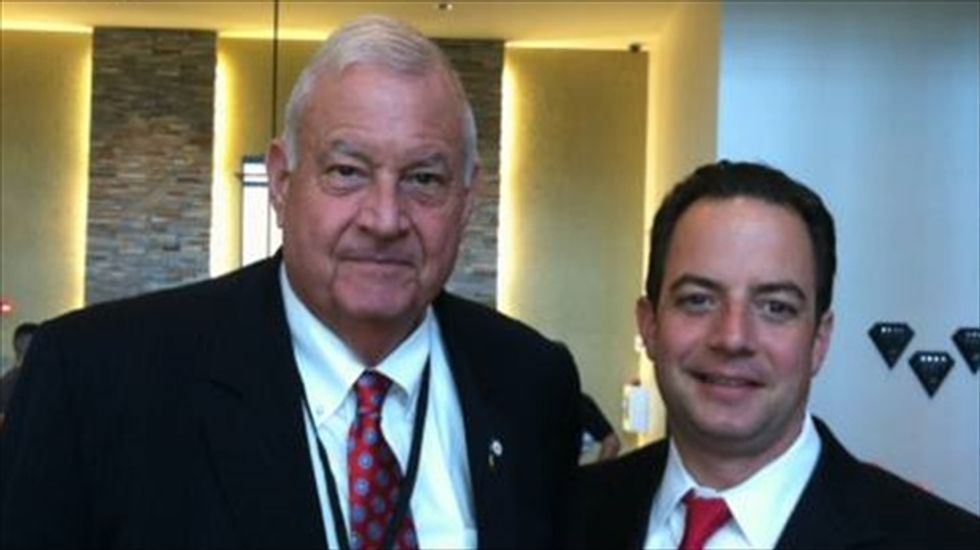 A former aide to the head of the Georgia Republican Party filed a lawsuit accusing another party official used a racist slur against her as part of a larger pattern of disrespect, the Atlanta Journal-Constitution reported on Wednesday.

Qiana Keith said in her lawsuit, filed in federal court on Tuesday, that she was belittled while working as party chair John Padgett's (pictured above, left) executive assistant, specifically during last year's "Chairman's Dinner" event, during which the party's accounting director, Karen Hentschel, responded to a complaint by financial director Margaret Poteet by saying, "Don't worry about her; she is just the house n*gger."

The lawsuit also claimed that Keith, who was supposed to attend the event as Padgett's "escort and aide," was left off of the party's duty assignments for the event and replaced by a white man. When Keith raised the issue with executive director Andy Pipkin, he allegedly criticized her for seating a Black man at the same table as Padgett.

"Ms. Keith explained that she was just doing what she was told because Hentschel told her to 'fill the f*cking seats' when Ms. Keith asked about an empty seat at the Chairman's table, but Pipkin ignored her," the lawsuit stated.

Keith said in her suit that her firing this past March was in response to complaining about her treatment. The party's attorney, Anne Lewis, said in a statement that her employment was terminated due to Keith's "consistently poor job performance."

When Keith contacted the party in August 2013 claiming "race discrimination and retaliation," Keith's statement read, "we immediately undertook a full investigation of those claims and found that there was no merit to any of them. The party and Chairman Padgett will vigorously defend themselves in court against these completely unfounded claims."

The suit also accused Poteet and Hentschel of mocking her in a staff meeting over a wage garnishment ordered by the state of Montana against Keith after she pleaded guilty to an unidentified felony in 2002. Keith said the party was aware of her criminal record when she was hired in June 2013.

After Keith informed Hentschel of the garnishment, Poteet allegedly said, "I didn't even know there were black people in Montana."

Keith then allegedly contacted Pipkin via email and met with him in person to discuss her concerns, only to be ignored until her firing.

Read the lawsuit, as posted online on Wednesday, below.